Wall Street Journal Tax Report:  Are You Ready to Be Audited?, by Laura Saunders: 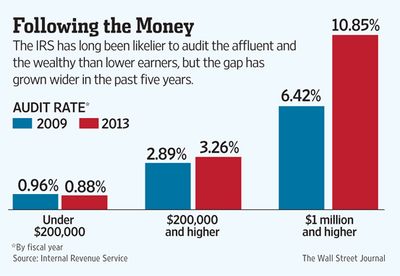 The IRS's most intimidating weapon is the power to audit—and well-heeled taxpayers are more likely to be the target.

Audits are rare and getting rarer as the agency faces funding cuts. Fewer than 1% of taxpayers endured one last year, according to IRS figures. But while the audit rate has fallen over the past five years for taxpayers who earn less than $200,000, the rate has risen for those earning $200,000 to $1 million.

The increase was particularly sharp for people earning $1 million or more. Nearly one in nine of those taxpayers was audited last year compared with fewer than one in 15 in 2009.

"It's as though they'd rather audit 10 high-income people and get something, rather than 25 cash businesses and get nothing" because the owners can't pay, says Janet Hagy, a certified public accountant in Austin, Texas.

Taxpayers facing an audit also are dealing with an agency that is underfunded and often unresponsive. IRS Commissioner John Koskinen recently told Congress the agency won't be able to answer 18 million phone calls this year, nearly 40% of the calls it receives, and that the wait time for those who do get through will be about 25 minutes, up from 10 minutes in 2010. More than half the letters taxpayers send to the IRS this filing season will take longer than 45 days to answer, he added.

The IRS training budget has dropped 87% since 2010, which is affecting audits of all types, experts say. "In the last few years, I've seen more delays, ill-founded IRS positions and outright bad behavior than ever before," says Andy Biebl, a CPA who oversees tax audits for CliftonLarsonAllen in Minneapolis. ...

Here are other tips for avoiding or surviving an encounter with the IRS.

Some tax moves attract more scrutiny from the IRS than others. One of the biggest is reporting high income. Audit rates start shooting up sharply for taxpayers who make more than $200,000 a year. Here are 12 others.