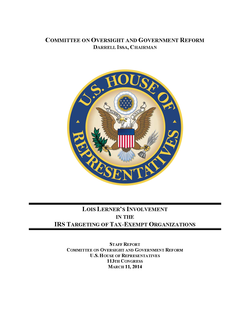 The House Committee on Oversight and Government Reform this morning released a 141-page staff report, Lois Lerner's Involement in the IRS Targeting of Tax-Exempt Organizations:

So 501(c)(4)'s are allowed to do unlimited political work and lobbying?

Now try to imagine if Bush had done this.

Well, we know for damn sure the Department of Justice won't do a thing...

Can a person give a full interview to DOJ on a subject matter while asserting Fifth Amendment rights before Congress? That surprises me, but I don't practice this area.

Scandalous and improper behavior, and undermines the IRS role as neutral tax collector, turning it into the paid goons of the state party.

Of course, the GOP will do nothing. Want to bet?

Great job on keeping up with this. One wonders when and if Lerner will have to face justice.