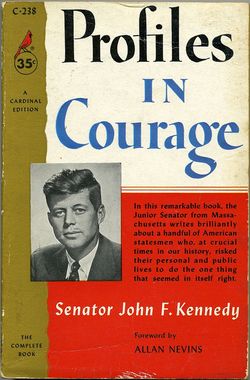 The John F. Kennedy Presidential Library and Museum today named Former President George H. W. Bush this year’s recipient of the John F. Kennedy Profile in Courage Award "in recognition of the political courage he demonstrated as President when he agreed to a 1990 budget compromise which reversed his 1988 campaign pledge not to raise taxes and put his re-election prospects at risk."

And I'm the one who will not raise taxes. My opponent now says he'll raise them as a last resort, or a third resort. But when a politician talks like that, you know that's one resort he'll be checking into. My opponent won't rule out raising taxes. But I will. And the Congress will push me to raise taxes and I'll say no. And they'll push, and I'll say no, and they'll push again, and I'll say, to them, ‘Read my lips: no new taxes.’

“This year’s Profile in Courage Award recipients exemplify what President Kennedy most admired in public servants: extraordinary courage in serving the greater good,” said [Jack Schlossberg, President Kennedy’s grandson], who is a member of the Profile in Courage Award committee. “In his first term in office, President George H. W. Bush risked his reputation and ultimately his political career by forging an important compromise on the budget in 1990 that moved our country forward, and should not be forgotten. ...

In 1990, with the federal deficit at $200 billion and the Congressional Budget Office suggesting it could double, President Bush negotiated with congressional Democrats to enact a budget deal which included spending cuts and tax increases aimed at reducing the deficit by approximately $500 billion over the following five years. The 1990 bipartisan budget agreement set annual limits on discretionary spending by Congress on defense, domestic programs and international affairs. It also, for the first time, created “pay as you go” rules for entitlements and taxes. In order to reach the deal, Bush agreed to a tax increase as part of the compromise, and he was pilloried by conservatives for doing so. Although he recognized the 1990 budget deal might doom his prospects for reelection, he did what he thought was best for the country and has since been credited with helping to lay the foundation of the economic growth of the 1990s that followed.

New York Times, A Profile in Courage Prize for George Bush (the Other One), by Andrew Rosnethal:

The Republican Party did not much tolerate dissent from its ideological orthodoxy in 1990, as Mr. Bush learned the painful way. Now it doesn’t tolerate the slightest deviation. Mr. Norquist, who is still trying to cripple government by forcing Republicans to oppose any tax, no matter how small or sensible, was outraged by the Foundation’s choice.

He took to Twitter faster than you can say “no independent thinking.”

That tweet may be the ultimate tribute to Mr. Bush. He didn’t lie to anyone. He changed his mind because it was the right thing to do, and that’s what Mr. Norquist cannot tolerate.

Oh, he lied all right. He didn't wait until there was no alternative but to raise taxes; I vividly remember budget director Dick Darman doing the rounds on the Sunday morning talk shows insisting that taxes must be raised, well before negotiations with Congressional Democrats had reached an impasse.