The number of criminal prosecutions referred each year by the IRS has risen by nearly a quarter — 23.4% — during the Obama administration when compared with the Bush years. Convictions are also drawing slightly longer average prison terms — 27 months under Obama versus 25 months under Bush (see Table 1).

The comparisons of the number of individuals referred to federal prosecutors by the IRS, as well as IRS staffing, are based on case-by-case information obtained by TRAC under the Freedom of Information Act from the Executive Office for United States Attorneys and the Office of Personnel Management.

Last year was a banner year for criminal prosecutions referred by the IRS. During FY 2013 the government reported 2,010 new prosecutions, a jump of 30.6 percent over the past fiscal year when the number of prosecutions totaled 1,539. 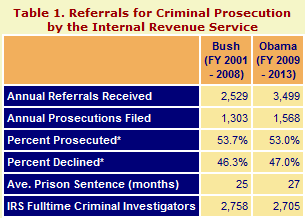