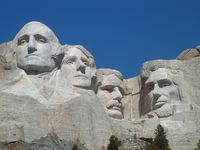 Lebron James sparked a meme over the NBA's version of Mount Rushmore (Thomas Jefferson, Abraham Lincoln, Theodore Roosevelt, and George Washington) when he listed the four greatest players in NBA history as Larry Bird, Magic Johnson, Michael Jordan, and Oscar Robertson.  Kobe Bryant chimed in with his own version:  Larry Bird, Magic Johnson, Michael Jordan, and Bill Russell.  ESPN has created a Mount Rushmore of Sports, with lists of the four all-time greats in a variety of sports, and the media has created a wide range of Mount Rushmore lists.

Look at it this way: at least Lincoln wasn't saddled with student loans

Anon, Lincoln was graduated from the same Ivy League school as Washington and Jefferson, but Michael's point re the Tax Mount Rushmore is insightful and demands remedy. Might I nominate Lauryn Hill? While technically not a tax prof, standards should always be relaxed in the face of higher principles.

I think it might be nice to have someone who wasn't an Ivy League white male, but you could say that about the real Mount Rushmore, too.

All very worthy tax scholars, and true gentlemen too.