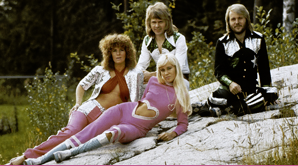 The glittering hotpants, sequined jumpsuits and platform heels that ABBA wore at the peak of their fame were designed not just for the four band members to stand out – but also for tax efficiency, according to claims over the weekend.

Reflecting on the group's sartorial record in a new book, Björn Ulvaeus said: "In my honest opinion we looked like nuts in those years. Nobody can have been as badly dressed on stage as we were."

And the reason for their bold fashion choices lay not just in the pop glamour of the late 70s and early 80s, but also in the Swedish tax code.

According to Abba: The Official Photo Book, published to mark 40 years since they won Eurovision with Waterloo, the band's style was influenced in part by laws that allowed the cost of outfits to be deducted against tax – so long as the costumes were so outrageous they could not possibly be worn on the street.

I guess that explains this: