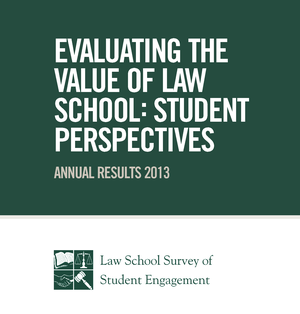 Since 2007, the job market for new law school graduates has been in steady decline. According to the National Association of Law Placement, the overall employment rate was 92% in 2007. By 2012, however, that rate had declined to 85%. Moreover, median starting salaries as well as the proportion of new graduates working in jobs for which the law degree is required have experienced similar declines.

Given the angst engendered by these trends, conventional wisdom dictates that students are less satisfied with their law school experiences, especially the career counseling and job search help they receive. However, newly released data from the Law School Survey of Student Engagement (LSSSE) challenges this assumption. According to the survey, which garnered responses from more than 26,000 students at 86 U.S. law schools, student satisfaction rates have remained relatively stable since before the downturn.

These trends suggest that the challenging environment has not led to an increase in the proportion of law students who feel their school shoulders some blame for job search difficulty. The stability of these trends, in light of the overall market, is heartening, given much of the criticism directed at legal education. It is possible that law schools have been able to stem increased dissatisfaction by redoubling efforts to advise students on career-related matters.

But the trends have an unfavorable side. Large percentages of students remain unsatisfied with the career counseling and job search help they have received. In addition, satisfaction with all advising services—career, academic, personal, and financial aid—sharply declines as students progress through their program, with first year students being most satisfied and students in their final year being least satisfied.

According to Aaron N. Taylor, director of LSSSE and assistant professor of law at St. Louis University School of Law:

“These findings offer reasons for law schools to be encouraged, while also recognizing that more must be done. Satisfaction with advising services is associated with overall law school satisfaction and greater gains in academic and professional development. Therefore, law schools have a compelling interest in ensuring that students feel adequately supported throughout their matriculation. Advisory services may add to the cost of legal education, but they also add substantially to the effectiveness of what occurs in the classroom.” LSSSE's 2013 Annual Results, Evaluating the Value of Law School: Student Perspectives, explores four themes, drawing on data gathered in 2013 from over 26,000 students at 86 U.S. law schools:

The report is introduced by David N. Yellen, Dean and Professor of Law, Loyola University Chicago School of Law.

Other key findings from the 2013 LSSSE report are: