Stable-to-growing demand has been a characteristic of law schools for the much of the past 25 years, but since 2010 enrollment at many law schools has dropped precipitously. ... Standard & Poor's Ratings Services has observed a significant reduction in enrollment at the law schools it rates [123 of the 201 ABA-accredited law schools], which, in many cases, has more than offset the growth generated during the recession. We believe high prospective debt loads and dwindling post-graduation employment opportunities have contributed to the large declines in enrollment at many law schools in the short term. We will continue to assess these risks, as well as the medium to long-term risks to law school enrollment associated with technological advances and increasing efficiencies in the legal employment market that have the potential to permanently alter the demand for lawyers.

We believe the credit profiles of law schools has diverged, with the strong becoming stronger or remaining stable while the weak are becoming weaker. Credit quality has been deteriorating for stand-alone law schools [S&P rates five of the 23 ABA-accredited stand-alone law schools], which are more susceptible to credit deterioration than law schools that are nested within comprehensive universities. But even with programmatic diversification, some lower rated ('BBB' category) universities that have historically relied on their law school operations for profitability are experiencing credit deterioration. ... 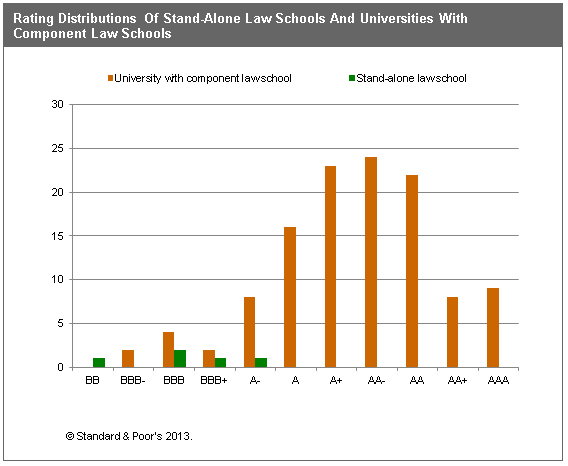 We rate five of the 26 ABA-accredited stand-alone law schools and public and private universities containing 118 of the 175 ABA-accredited component law schools. ... Market-wide reductions in demand and enrollment have put pressure on credit quality among all the stand-alone law schools we rate. Four of the five currently have negative outlooks, which reflects deterioration in the sector over the past couple of years and suggests the likely continued weakening of credit quality in the future. And the outlook on the fifth standalone has been revised back to stable from positive. ... 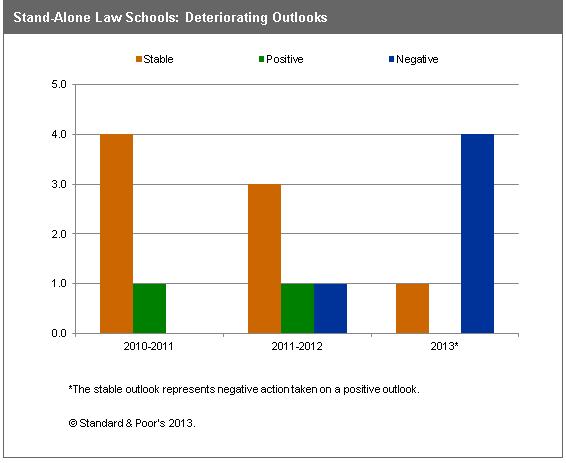 Thomas Jefferson is the most vulnerable, especially given the continuing lawsuit, but also given its market position as the third best law school in San Diego (after USD and Cal Western, both well-established), and its even weaker position in Southern California (where UCLA, USC, and, probably soon, UC-Irvine will dominate, while Loyola-LA, and Pepperdine are powerful regional players--I have less sense of the relative positions of Whittier and Southwestern, but they are better-established than Thomas Jefferson). Credit downgrades notwithstanding, I fully expect New York, Brooklyn and Albany to be training lawyers ten years from now. Thomas Cooley's business model is a bit opaque to me, so I venture no opinion!

The precipitous drop in law-school demand is dividing the U.S. legal education system into the haves and have-nots, according to a new credit-rating analysis by Standard & Poor’s Ratings Services. ...

Stand-alone law schools – those unaffiliated with broader universities – have been hit particularly hard by the recent dip in law-school demand, largely because schools lack the backstop of a bigger institution. But one of the most troubling finds is that it’s not just these schools that are vulnerable. The enrollment drop is also creating financial risk for smaller universities that contain law schools, such as Widener University in Pennsylvania, Pace University in New York, and Suffolk University in Massachusetts. ...

The credit rating of Thomas Jefferson School of Law, a stand-alone in San Diego, was downgraded two notches in October to B+ — junk-bond status — with a negative outlook.