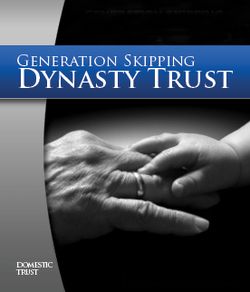 Among the nation’s billionaires, one of the most sought-after pieces of real estate right now is a quiet storefront in Sioux Falls, South Dakota.

A branch of Chicago’s Pritzker family rents space here, down the hall from the Minnesota clan that controls the Radisson hotel chain, and other rooms held by Miami and Hong Kong money.

Don’t look for any heiresses in this former five-and-dime. Most days, the small offices that represent these families are shut. Even empty, they provide their owners with an important asset: a South Dakota address for their trust funds.

In the past four years, the amount of money administered by South Dakota trust companies like these has tripled to $121 billion, almost all of it from out of state. The families needn’t actually move to South Dakota, or deposit their money at a local bank, or even touch down in the private jet. Little more than renting an address in Sioux Falls is required to take advantage of South Dakota’s tax-friendly trust laws. [Graphic] 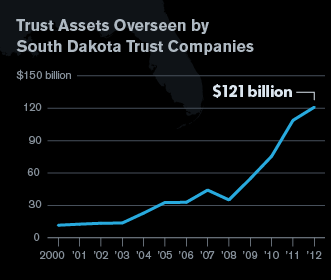 States like South Dakota are “creating laws that are conducive to a massive exploitation of a federal tax loophole,” said Edward McCaffery, a professor at the University of Southern California’s Gould School of Law. “We have a tax haven in our midst.”

South Dakota’s sudden popularity illustrates how, at a time of rising U.S. economic inequality, the wealthiest Americans are embracing ever more creative ways to reduce taxes legally. Executives at South Dakota Trust Co., one of the biggest in the state, estimate that one-quarter of their business comes from special vehicles known as “dynasty trusts,” which are designed to avoid the federal estate tax. Creation of such trusts has surged in recent years as changes in federal law enabled more money to be placed in them.

While the super-rich use various tools to escape the levy -- some have exotic names like the “Jackie O” trust and the “Walton GRAT” -- the advantage of dynasty trusts is that they shield a family’s wealth forever. That defies the spirit of the estate tax, enacted almost 100 years ago to discourage the perpetuation of dynastic wealth. ...

President Barack Obama has called for closing the dynasty trust loophole in annual budget proposals, even though the change wouldn’t boost tax receipts under his administration. The impact of dynasty trusts on federal revenue is far in the future -- though potentially enormous, said Lawrence Waggoner, a retired professor at University of Michigan Law School. “The federal government won’t lose out for maybe 90 years, and maybe that’s why Congress is not terribly interested in the subject,” Waggoner said. “The longer they procrastinate, you have larger and larger amounts in perpetually tax-exempt trusts.”

One clue to how much wealthy families might save comes in [Pierce H. McDowell, III, The Dynasty Trust: Protective Armor for Generations to Come, Tr.. & Est., Oct. 1993, at 47]. Just $1 million invested in a dynasty trust, and earning 12 percent a year, would swell to $1.9 billion in 85 years, he wrote -- compared with $488 million if the same trust was located in New York, subject to both state income taxes and the federal estate tax when it expired.