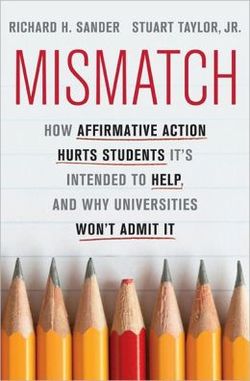 I would disagree with the characterization of the court's ruling in this article. Sander has not yet really won anything. Although the Supreme Court said there was a public interest in the data, Sander only wins if the court hearing the remand finds that the data can be provided in a way that accords with the privacy interests of applicants.

The characterization of the court holding in this article is misleading.

You teach at *awkward cough* Rutgers Camden Law, where the median J.D. numeric credential was 155 LSAT/3.31 GPA for 2012, so your observation makes perfect sense.

However, Sander's thesis, I believe, is that, when you take a minority applicant with numeric credentials that make them legitimate contenders at Rutgers, i.e., an African American applicant with a 157 LSAT/3.35 GPA (from fill in the blank non-selective state university), and grant that applicant entrance on affirmative action/diversity grounds to, let's say, UCLA Law, UCLA might be inadvertently setting that minority applicant up for failure, notwithstanding UCLA's noble intentions of rectifying years of injustice and inequity in the legal profession, because, as you know, law students are graded on a curve, so this minority 157/3.31 admit to UCLA Law, is competing with students whose 25th percentile numbers were 165/3.58 (median 168/3.78)!!!!

Indeed, I think Sander's point is that if you pit a bunch of white 157/3.31 folks with against UCLA Law students with their lofty numerical credentials, they'd have a hard time competing (who would argue with that?), and indeed, looking at admission data that is publicly available, a white Anglo-Saxon heterosexual person (i.e., non-URM) whose numeric credentials are 157/3.31, has stood little or no chance of getting into UCLA Law in recent years. But schools like UCLA Law have systematically admitted URMs with below numeric credentials far below 25th percentile (and that’s not surprising given the dearth of non-Asian minorities that score high on the LSAT, and that’s a serious problem, why is that, and how can we fix it?).

BUT, the question, that the data obtained through the lawsuit will show, is whether, or not, minority students admitted to schools where their numerical credentials were mismatched (i.e., woefully low), underperformed and were thus done a disservice when they should have gone to a school like yours, where they could have competed and excelled.

I think the point, Michael, is that Sander can now access data to find out. The ruling is for less speculation and more data analysis.

I think this book was true once but no longer. I don't see a difference in the performance of our minority and nonminority students. I think he is confusing a temporary adjustment with a permanent problem.