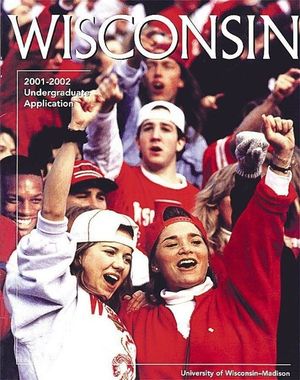 Diallo Shabazz was a student at the University of Wisconsin in 2000 when he stopped by the admissions office. "One of the admissions counselors walked up to me, and said, 'Diallo, did you see yourself in the admissions booklet? Actually, you're on the cover this year,' " Shabazz says.

The photo was a shot of students at a football game — but Shabazz had never been to a football game. "So I flipped back, and that's when I saw my head cut off and kind of pasted onto the front cover of the admissions booklet," he says.

This Photoshopped image went viral and became a classic example of how colleges miss the mark on diversity. Wisconsin stressed that it was just one person's bad choice, but Shabazz sees it as part of a bigger problem.

Even without Photoshop, colleges try to shape the picture they present to prospective students, says Tim Pippert, a sociologist at Augsburg College in Minnesota. ... Pippert and his researchers looked at more than 10,000 images from college brochures, comparing the racial breakdown of students in the pictures to the colleges' actual demographics. They found that, overall, the whiter the school, the more diversity depicted in the brochures, especially for certain groups. "When we looked at African-Americans in those schools that were predominantly white, the actual percentage in those campuses was only about 5 percent of the student body," he says. "They were photographed at 14.5 percent."

"99% of all those happy students in libraries. classrooms, and labs are stock photos"

Don't worry - 50%+ of those "satisfied" law school grads are fictional too...

I work as a Creative Director in marketing and advertising. As my daughter has been looking at colleges for several months I have amused her, and myself, by pointing out how many of the photos in their materials - print and online - are stock photos.

I know this because I have seen many of them and even used a few.

99% of all those happy students in libraries. classrooms, and labs are stock photos.

Just think how much better the photoshopping techniques are now

The National Park Service and the Forest Service could benefit from this technique, seeing that you almost never see a Black or Hispanic or Native Amerikan face at any of the vaunted public lands, The notable exception to the racism is Yosemite, which is overwhelmingly attended by Asians, both citizen and foreign tourist.