Maps of the Seven Deadly Sins in America

Geographers from Kansas State University have created a map of the spatial distribution of the Seven Deadly Sins [wrath, greed, sloth, pride, lust, envy, gluttony] across the United States. How? By mapping demographic data related to each of the Sins. Below are screenshots of the maps in standard deviation units; red naturally is more sinful, blue less sinful. 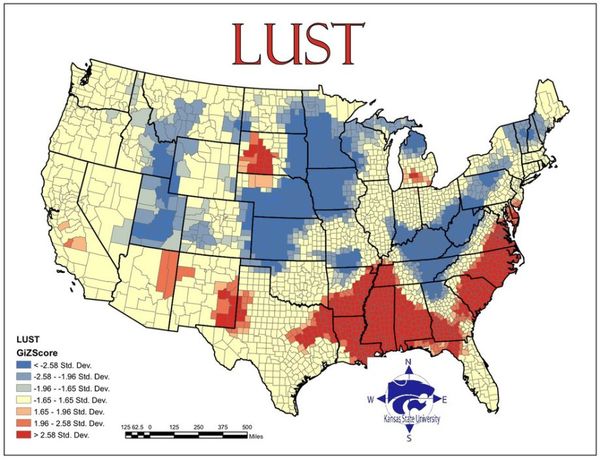 Too funny, but in 2009 William Pike at Britannica blog put it best:
"The Kansas State researchers attempted to quantify these sins through federal data that seems to correlate with each sin in question, and then mapped out the results by county. In all fairness to the researchers, I doubt their labors were for anything besides a thought-provoking look at various aspects of the American landscape. They don’t appear to want the public placing too much weight on the findings, and anyone who does is jumping to wild conclusions.

Alas, that does not stop various media souces from, indeed, jumping to wild conclusions. Religion News Service, of all places, titles its article, “How do you spell lust? M-I-S-S-I-S-S-I-P-P-I.” Other news sources are slowly picking up on a “Bible-belt-as-hotbed-of-sin” theme as well. But it’s not quite that simple.

The data used to “measure” these sins is, first of all, quite arbitrary. Lust is measured by incidences of sexually transmitted diseases. Greed is a comparison of average incomes with the percent of population living in poverty. Envy is determined by the number of thefts, wrath by the number of vioent crimes…and so on.

The very first map I looked at (“Lust”: what else would the media highlight?) presented me with a problem in this data. Having lived in South Dakota for a few years, I immediately noticed that all of the dark-colored, oh-so-deeply-lustful counties in that state were, in fact, located in American Indian reservations. In South Dakota (and I would guess elsewhere as well) it is a well-known fact that sexually transmitted diseases are rampant on the reservations, but rather than signifying some hidden Lakota lust, this is a product of poor education, poor health care, poor family structures, and, quite simply, being poor. Surely Mississippi’s STD problems are a result of more than mere lust as well.

And if it’s so easy to poke fun at lust in the Bible belt, why not point out that “greed” seems most prevalent, by far, in the Northeastern states and Southern California. Indeed, such data has little to do with individual ethics, and everything to do with societal structures and problems inherent in certain locales and population densities."