Sheldon Adelson makes no secret of his disdain for the estate tax. “How many times do you have to pay taxes on money?” the casino magnate asks. ... Shares of his Las Vegas Sands Corp. are at a five-year high, making him one of the world’s richest men, worth more than $30 billion. ...

Federal law requires billionaires such as Adelson who want to leave fortunes to their children to pay estate or gift taxes of 40 percent on those assets. Adelson has blunted that bite by exploiting a loophole that Congress unintentionally created and that the IRS unsuccessfully challenged.

By shuffling his company stock in and out of more than 30 trusts, he’s given at least $7.9 billion to his heirs while legally avoiding about $2.8 billion in U.S. gift taxes since 2010, according to calculations based on data in Adelson’s U.S. Securities and Exchange Commission filings.

Hundreds of executives have used the technique, SEC filings show. These tax shelters may have cost the federal government more than $100 billion since 2000, says Richard Covey, the lawyer who pioneered the maneuver. That’s equivalent to about one-third of all estate and gift taxes the U.S. has collected since then.

The popularity of the shelter, known as the Walton grantor retained annuity trust, or GRAT, shows how easy it is for the wealthy to bypass estate and gift taxes. Even Covey says the practice, which involves rapidly churning assets into and out of trusts, makes a mockery of the tax code. “You can certainly say we can’t let this keep going if we’re going to have a sound system,” he says with a shrug.

Covey’s technique is one of a handful of common devices that together make the estate tax system essentially voluntary, rendering it ineffective as a brake on soaring economic inequality, says Edward McCaffery, a professor at the University of Southern California’s Gould School of Law. Since 2009, President Barack Obama and some Democratic lawmakers have made fruitless proposals to narrow the GRAT loophole. Any discussion of tax shelters has been drowned out by the debate over whether to have an estate tax at all, McCaffery says. ...

Facebook Chief Executive Officer Mark Zuckerberg and Lloyd Blankfein, the CEO of Goldman Sachs, are among the business leaders who have set up GRATs, SEC filings show. JPMorgan Chase helps so many clients use the trusts that the bank has a special unit dedicated to processing GRAT paperwork, says Joanne E. Johnson, a JPMorgan private-wealth banker. “I have a client who’s done 89 GRATs,” she says. Goldman Sachs disclosed in a 2004 filing that 84 of the firm’s current and former partners used GRATs. Blankfein has transferred more than $50 million to family members with little or no gift tax due, according to calculations based on data in his SEC filings. Charles Ergen, chairman of Dish Network, and fashion designer Ralph Lauren passed more than $300 million each, calculations from SEC filings show. ...

Congress created the GRAT while trying to stop another tax-avoidance scheme that Covey developed. In 1984, Covey, a lawyer at Carter Ledyard & Milburn in New York, publicized an estate-tax shelter he’d invented called a grantor retained income trust, or GRIT. Covey figured out how to make a large gift appear to be small. He would have a father, for example, put investments into a trust for his children, with instructions that the trust should pay any income back to the father. The value of that potential income would be subtracted from the father’s gift-tax bill.  Then, the trust could invest in growth stocks that paid low dividends so that most of the returns still ended up going to his kids.

Six years after Covey started promoting this technique, Congress termed it abusive and passed a law to stop it. The 1990 legislation replaced the GRIT with the GRAT, a government-blessed alternative that allowed people to keep stakes in gifts to their children while forbidding the abuse Covey had devised. Covey studied the law and found an even bigger loophole. “The change that was made to stop what they thought was the abuse, made the matter worse,” he says. Fredric Grundeman, who helped draft the bill while he was an attorney at the U.S. Treasury Department and is now retired, says the framers didn’t recognize the new law’s potential for abuse.

Covey recognized that a client could use the 1990 legislation to avoid gift taxes if he did something that would otherwise make no sense: put money in a trust with instructions to return the entire amount to himself within two years. Because he doesn’t have to pay tax on a gift to himself, the trust incurs no gift tax. Covey calls the trust “zeroed out.” Because the client isn’t paying any tax upfront, the transaction amounts to a can’t-lose bet with the IRS. If the trust’s investments make large enough gains, the excess goes to heirs tax-free. If not, the only costs are lawyer’s fees, typically $5,000 to $10,000, Covey says.

Three years after the new law took effect, Covey created a pair of $100 million zeroed-out GRATs for Audrey Walton, the former wife of the brother of Wal-Mart Stores Inc. founder Sam Walton. The IRS, which had banned such GRATs through regulation, demanded taxes and took her to court. In 2000, the U.S. Tax Court found in Walton’s favor, determining the 1990 law didn’t prohibit a “zeroed-out” GRAT. Covey had won a rare prize: an official seal of approval for a tax shelter. 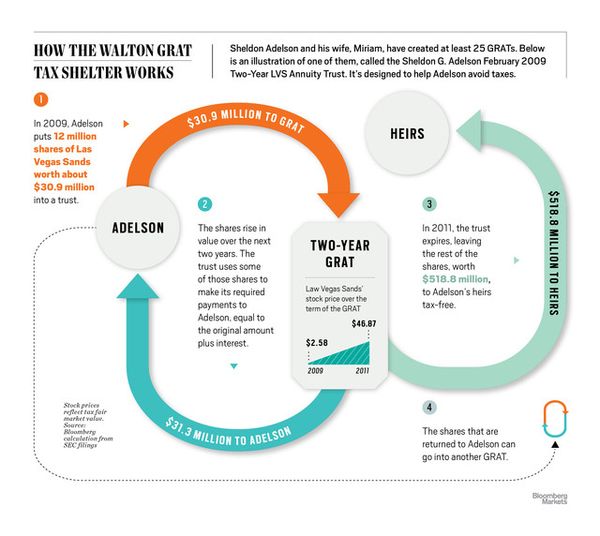 Two years after Covey’s court victory, Adelson set up a GRAT called the “Sheldon G. Adelson 2002 Two Year LVSI Annuity Trust,” Adelson’s SEC filings show. By 2009, he was juggling chunks of his fortune in as many as 10 GRATs at a time, filings show. ...

In all, Adelson and his wife, Miriam, have created at least 25 GRATs. At least 14 of the 25 trusts were zeroed out, according to the calculations based on SEC filings. Those trusts transferred at least $7.9 billion to family members, an amount that would otherwise have incurred gift taxes of $2.8 billion. Adelson has six living children, including two teenage sons. By early 2012, more than a third of Adelson’s stake in the Sands -- worth more than $10 billion today -- had already passed through GRATs to trusts overseen by his wife for the benefit of his family. ...

The GRAT loophole is unlikely to be plugged anytime soon. President Obama has included a proposal to limit the GRAT technique in each of his annual budget plans but hasn’t pressed Congress to act on it, says Kenneth Kies, a Republican tax lobbyist. Committees in the House and Senate are working on what they call comprehensive tax overhaul bills. Neither plans to address estate or gift taxes. Covey suggests one reason for the lack of action: Wealthy donors to politicians, both Democratic and Republican, want to keep the loophole in place.

No one knows for sure how much all of these GRATs cost the U.S. government. The IRS estimates the number of gift-tax returns filed in connection with new GRATs each year; there were about 1,946 in 2009, according to the most recent publicly available data. Taxpayers don’t have to report how much each GRAT ultimately passes to heirs. It’s as if Covey built an invisible highway bypass that carries some of the biggest fortunes past the tax man’s tollbooth. He marvels at the billions that flow along this route. “It boggles the mind,” he says.

Tommy: The gift taxation on the GRAT is calculated at the beginning, using a formulaic application of the Applicable Federal Rate to determine how much interest the GRAT assets will generate. The GRAT is set to return value back to the grantor, and this value can be set (if so chosen) to return the value of principal plus interest that the tax rules predict. So the value of the GRAT is "P" principal plus "I" anticipated interest, or P+I, and then the value that will be returned to the grantor can also be set at P+I. It's this formulation that's called "zeroed out," since the remainder value of the trust is officially zero.

The expectation on day one is that the GRAT will be worth P+I, so when the grantor receives P+I back, the GRAT is officially worthless. So the value of the gift is officially zero (but should probably file a gift tax return anyway, just to lock in the statute of limitations). Of course, the actual value of the trust could be worth more than zero, which is why the GRAT is useful. If the GRAT is more valuable than P+I, usually because of high-appreciation, zero-dividend stocks placed there, then the tax value is zero but the dollar value is high.

It's a gift, which is excluded from income tax consideration by § 102. The grantee takes the gift basis of § 1015, rather than the step up at death from § 1016. So the gain is still preserved in the stock, no gift tax or income tax having been paid. And any dividends on the stock or interest on other GRAT assets will be taxable to recipient, of course.

Funny that the article focuses on Adelson when the article also admits that the is a common tax planning technique. Seems to me that this article is more meant as a veiled hit piece on Adelson

The chart seems to indicate that in 2009, shares of Las Vegas Sands which were put into the trust were worth $30.9 million and in 2011, when the trust terminated, the same shares were worth over $550 million. Can this be correct?

could you elaborate on the GRAT mechanism? as a non-US law student, it's a bit difficult to understand what taxes bypassed by GRATs and exactly how: are the excess gains are not taxed at all?

Personally, i'll try to find out myself via Wikipedia/Google or some-such, but it would be helpful to describe in more detail the incentives behind GRATs.