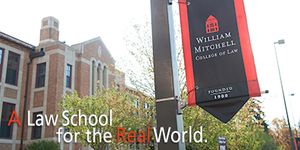 A Minnesota law school will become the first in the country to allow students to earn their degrees largely from home, with the blessing of the ABA.

On Wednesday, William Mitchell College of Law in St. Paul plans to announce its new hybrid option: Students will spend only a week or two on campus each semester, and take the rest of their classes online.

It’s the first such program at a fully accredited law school. And depending on whom you ask, it’s a risky, or a long overdue, venture that could shake up the tradition-bound halls of legal education.

The ABA, which accredits 203 law schools nationwide, has imposed strict limits on online classes for the past decade. But this month, for the first time, it approved a pilot project at William Mitchell that will permit students to complete up to half their coursework online.

Starting in 2015, students who opt for the hybrid will spend 12 weeks a semester taking online classes from home, sometimes through live webcasts, said Eric Janus, law school dean. Half the credit hours will still be taught on campus, but they’ll be squeezed into intensive weeklong marathons at the beginning or end of each term.

“This is not an online degree,” Janus said. But it will open up new possibilities, he said, especially for students in rural areas, who would otherwise have to quit their jobs or uproot their families. “This is going to allow us to [reach students] in ways that were never possible in a traditional sort of program,” he said.

The decision to add the hybrid option hasn’t been universally popular, even among the faculty, who voted to approve it Dec. 11. “I won’t claim that it was unanimous,” Janus said. “Not everybody believes that it’s a good idea. But by far the overwhelming majority of the faculty voted in favor.”

Prof. Douglas Heidenreich, a former dean of the school, was one of the dissenters. “I don’t think it’s a good approach for education in general,” he said. “I think there is something about legal education that makes the direct, face-to-face contact important.” ...

Like night school, the hybrid program will take four years to complete.

Anon,
Elie Mystal answers your question at the linked ATL post. The answer is that tuition will be "Traditional as all get out."

What is it going to cost?