The U.S. Department of the Treasury and the Internal Revenue Service today will issue initial guidance regarding qualification requirements for tax-exemption as a social welfare organization under section 501(c)(4) of the Internal Revenue Code. This proposed guidance defines the term “candidate-related political activity,” and would amend current regulations by indicating that the promotion of social welfare does not include this type of activity. The proposed guidance also seeks initial comments on other aspects of the qualification requirements, including what proportion of a 501(c)(4) organization’s activities must promote social welfare.

The Obama administration Tuesday proposed a crackdown on the widespread use of tax-exempt organizations for political campaigning, seeking to reduce the influential role that the secretive groups have played in recent elections. The new "guidance" issued Tuesday by the Treasury Department and the Internal Revenue Service would curtail a broad array of these tax-exempt entities' activities, including campaign advertising, voter registration, get-out-the-vote efforts, and distribution of voter guides and campaign material.

The process of completing the new regulations could take months, and officials said they expected a lot of feedback, acknowledging the political battles ahead.

The involvement in politics of tax-exempt groups organized under section 501(c)(4) of the tax code has been viewed by many as the biggest abuse of modern campaign finance rules, which aim to limit the influence of wealthy donors in elections.

The use of these organizations became a prominent issue in recent campaigns when groups such as the conservative Crossroads GPS and liberal Priorities USA raised millions of dollars from donors who could remain anonymous under tax rules. Critics say the groups have been too lightly regulated by the IRS, due in part to confusing regulations. ...

A string of major court decisions in 2010, including the landmark Citizens United decision, provided a major boost to 501(c)(4) entities by making it easier for companies and labor unions to contribute money to them. That led to a flood of donations.

The largest such organization, Crossroads GPS, which is run in part by GOP strategist Karl Rove, raised $180 million for the 2012 campaign from about 1,500 donors. The biggest single contribution to Mr. Rove's group was $22.5 million. By contrast, the Republican and Democratic parties were prohibited from accepting donations larger than $30,800. Donors to individual candidates were capped at $2,500 per election.

President Barack Obama criticized the existence of outside political entities, though a group of his supporters created Priorities USA to support his re-election.

A total of 10 of these 501(c)(4) entities raised more than $10 million each to spend on the 2012 election, according to data from the Center for Responsive Politics. 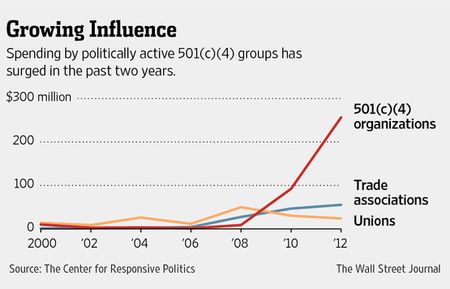 Why can't the big 405(c)(4)s reorganize as C-corps, and instead of accepting contributions, sell shares of non-voting, non-dividend paying preferred stock. Capital contributions are not taxable as income, and so presto, the firm would not have any taxable income.

Although I am not a tax lawyer, this proposed rule seems very troubling purely from a tax perspective.

First, we are not talking about the whether contributions to an organization should be deductible. Contributions to 504(c) groups are not currently deductible and this rule doesn't change that.

Second, suppose you were to treat 504(c) groups engaged in the proscribed activity as profit-making firms, as the IRS is currently proposing, and were to tax them on their "profits." In theory, that shouldn't matter because none of them make profits. They spend everything they take in, and so have no "profit" to tax. The problem is that the IRS takes a "damned if you do, damned it you don't" approach to deductions. A firm can't deduct business expenses unless they are incurred with the hope of making a profit. These 504(c) groups aren't trying to make profits, so their business expense are not deductible. That result is to treat all the contributions they receive as "income" with no matching deductions for expenses. This strikes me as fundamentally unfair purely from a tax perspective, without even considering the first amendment issues at stake.

The purpose of the "business profits" test, as I understand it, is to prevent people from deducting expenses for their hobbies. Thus we can agree that individuals should not be allowed to deduct money they spend on political activities (viewing such as a form of hobby). But we don't then turn around and tax them on the money they are spending on political activities. They earn it, they pay taxes on their earnings, they can spend it as they wish. The effect of this rule is to impose a tax on monies spent by individuals for political purposes so long as the individuals are working together with someone else. I don't see the tax logic for that, and the First Amendment problems are self-evident.