This year will set a record for expatriations by U.S. taxpayers, with at least a 33% increase from the previous high in 2011.

The Treasury Department published the names of 560 people who either were U.S. citizens renouncing their citizenship or long-term residents who turned in their green cards during the third quarter.

That brings the total so far this year to 2,369, according to Andrew Mitchel, a tax lawyer in Centerbrook, Conn., who tracks the data. For all of 2011, the number of published expatriates was 1,781, he said. 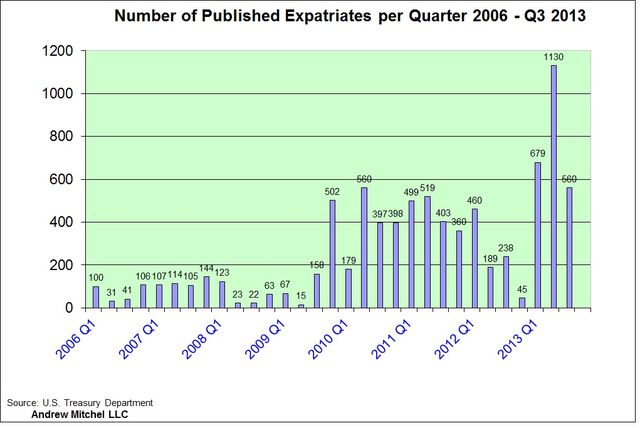 I' moved to Germany in 1969, married a German and lived here ever since. I would love to have dual citizenship, like my kids have, but the law at the moment says I must turn in the American,,,,,,WHY??? It seems so silly.

The USG provides no services or benefits for Americans living abroad other than the meagre services offered at embassies and consulates which are priced at rates that are stupidly high. $50 just to get a one page document notarised! What kind of service is that? What kind of justification is that for making expats pay tribute back to the homeland?

When I renounced US citizenship, I fully enjoyed letting the door hit me squarely on the @$$. The way the US treats its ex-pats is shameful. America's founders are rolling in their graves.

I know four people who have expatriated in the past several years:
1) A lady who is now 65 emigrated from Europe to the US in the 1970s, obtained US citizenship while there and returned to her home country in the 1990s after a divorce.
2) A mom who is about 45 acquired US citizenship through birth to an American father in Germany. She has always lived in Europe and never in the US. She simply inherited US citizenship.
3) A US-born manager who left the US in the late 1990s. I was rather surprised to see his name on the Federal Register list but apparently he has decided not to return.
4) A German-born US Army brat who lived much of his life in Germany, where he was also a member of the US military. He has a European wife and decided to retire in Europe. His wife does not speak English.
Summary: Three of the four I know are well settled in Europe and it probably makes sense for them to give up the blue passport if they don't plan to live in the US in the future. Don't know anything about #3's decision to comment.

I agree with Publius Novus that US citizenship is a good riddance. I renounced last year and my name is not on the list.

I'm advising a client as we speak on whether to renounce citizenship. When our rates get high enough, it just makes economic sense if the taxpayer has no real ties to the country.

While these people are surely not the wealthiest Americans (who have many avenues via which to pay little to no tax), they are certainly people who pay significant taxes. I bet a lot of them are earners in the $200K to $500K range. They earn enough to pay a lot of tax, but are not rich enough to avail themselves of loopholes to pay little or no tax.

I became expat in 1989 and haven't lived in the USA since.. I renounced officially last year and wouldn't move back for a million bucks. Living the good life in Northern Europe.

Can I renounce my US citizenship and just become an illegal alien? I'd have more rights.

Goodbye, good riddance, and take care the door doesn't hit you on your hinder parts on the way out (we don't want an FTCA suit for damages).

My question is: We see people leaving the UK, Frances and some other the other European countries but what country are these and others like them going to?

Hi TPB - I am someone who may join this graph. Been living in Munich for six years, and New York/Chicago prior to that. At this point, the total tax burden in Germany is LOWER than New York and Chicago, and the public services I receive for my taxes is consistently better (schools, transportation, parks, etc.). Plus, the amount of corruption I read about in the U.S. is stomach-turning, and both sides seem to be so entrenched that there is no realistic way forward with practical changes to make things better. My wife and I would love to go back to the U.S. some day, but other than family there are not may good reasons to do so. (Although Texas looks OK). Thanks for the post.

Let us say that all of the 2,369 people that renounced their US citizenship were had a net worth of $1M. That only comes to 2 billion dollars. By itself a large figure, but to the US government that is probably a rounding error.

It would be interesting to have some demographic details on this group. Old fogies returning to the lands of their ancestry is one thing; Silicon Valley-type entrepreneurs is quite another.