The Treasury Inspector General for Tax Administration today released The Internal Revenue Service Is Not in Compliance With Executive Order 13520 to Reduce Improper Payments (2013-40-084):

The IRS has made little improvement in reducing improper Earned Income Tax Credit (EITC) payments since being required to report estimates of these payments to Congress. The IRS’s Fiscal Year 2012 improper payment report to TIGTA indicates that EITC payments totaled nearly $62 billion. The IRS estimated that 21 to 25 percent of the EITC payments made in Fiscal Year 2012 were paid in error. ...

Executive Order 13520, signed by the President on November 20, 2009, increased Federal agencies’ accountability for reducing improper payments while continuing to ensure that their programs serve and provide access to their intended beneficiaries. The IRS has taken steps to ensure access and participation by eligible individuals. The IRS estimates that the participation rate for individuals who are eligible to receive the EITC is between 78 and 80 percent.

However, the IRS is still not in compliance with the requirements of Executive Order 13520. The IRS has not established annual improper payment reduction targets as required. The IRS cited the complexity of the EITC program as well as the need to balance the reduction in improper payments while still encouraging individuals to use the credit as the two main reasons why reduction targets have not been established. IRS management stated that they recently met with the Office of Management and Budget and agreed to work together to develop supplemental measures and indicators in lieu of reduction targets. However, the IRS did not indicate when these measures would be in place. 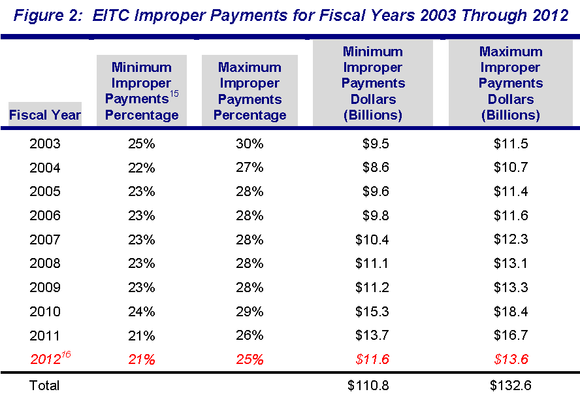 I'm not looking it up, but I remember other stories of IRS workers being told to not scrutinize suspicious claims for payments by this Treasury Department. This scam is allowed to continue as a policy of the Administration's redistribution program.

This is what happens when a government's primary mission becomes "REDISTRIBUTION OF WEALTH."

And stopping Medicare fraud is how we are going to pay for about $500 billion of ObamaCare over the next 10 years....by executive order, I assume.
Hell, Medicare fraud is about the only growth industry we have these days.

If we assume the same %, then the additonal child credit had about 7-8 billion in improper payments per year as well. Most of the 'improper' probably involved claiming children who did not actually live with you for the required 6 months minimum.

Ummm. Say that again? About a million times? On Sixty Minutes?