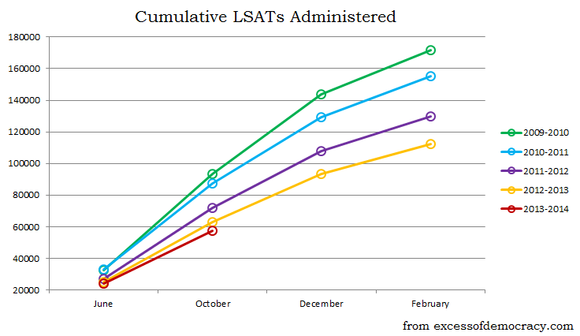 LSAC has now released data about the number of people who sat for the October LSAT. The total number of takers was down 10.9% from October 2012. The number of first time takers was down roughly 13% from last October. When you pair this data with attendance levels at recent LSAC Law School Forums (law school fairs, essentially) in Boston (down 47% from last year), Houston (down 15.4% from last year), Miami (down 16.3%), and New York (down 18%), law school admissions teams and law school deans are staring down some grim news.

Here’s some spooky news for law schools. The number of law school admission tests administered in October is down nearly 11% from the previous year, according to new data from the Law School Admission Council.

We are not far off from first year sections consisting of 70% foreign LL.M. students, 10% Masters of <>, and 20% J.D. students. Enjoy prawfs! Oh wait, teaching out of those canned case books means that it will be business as usual from your perspective, no matter the make up of the herd.

Law faculty always think this trend will just reverse itself and "return to normal." Why can't they see that this is the natural and inevitable reaction to the decreased value of a law degree. The sense of entitlement baffles me.

It seems like law schools are responding in one of two ways: (1) lowering enrollment and taking a hit financially or (2) lowering admission requirements. At bottom tier law schools, the admissions doors have been thrown open. What's going to happen to the bar passage numbers at these schools?

This is "grim news" only for law schools and faculty, who will face cut backs. This is good news for the rest of the legal profession.

Why is this grim news? For students intending to enter law school, it is good news because of lessened competition. Likewise for the job markets they will face upon graduation. Professor?

These mean LSAT statistics are no doubt used by proponents of philosophy programs to demonstrate how bright philosophy graduates are. I wonder, however, how many engineering students at the top of their class actually take the LSAT and how many go directly into fields that pay substantial sums of money.

This likely will serve as a wakeup call for schools as they appreciate the new normal. Perhaps we will actually get some quality control and the real institutions of legal instruction will strike back against the large diploma mills.