California is often ranked among the world’s most inventive regions. But most observers miss one of the major reasons why: the absence of non-compete agreements.

Barring non-competes is one of California longstanding strong talent mobility safeguards. Unlike most other states in the United States, but more like innovative Western European countries like Germany, the Netherlands, and Sweden, California has rules about allowing job mobility within markets. The California Business Code voids all non-competes agreements between businesses and their employees, while the California Labor Code restricts the ability of corporations to require their employees to pre-assign all inventions, even if unrelated to the job, during the course of employment.

California courts have been so adamant about enforcing the state’s prohibition of non-competes, they’ve held that companies who do not hire or promote talented employees who refuse to sign a non-compete (which would be void anyway if taken to court) are liable in tort and should be subject to punitive damages. They’ve even refused to enforce non-competes that were signed in other states, announcing them contrary to state policy.

Conversely, Boston’s Route 128 tech beltway has not flourished the way Silicon Valley has, in part because of restrictive non-compete agreements. Non-competes have contributed to the more rigid, vertically integrated, and prone to insourcing ethos of Boston’s high tech region.

California’s lack of non-compete agreements is the reason Marissa Mayer could assume the position of CEO at Yahoo! immediately upon leaving its direct competitor, Google. And, as it turns out, it’s the reason California’s cities are some of the most innovative in the world – and provides a model for fueling innovation and economic growth elsewhere. 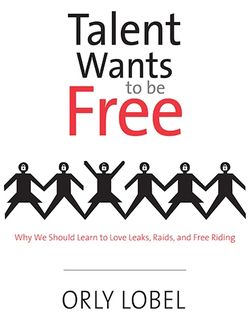 This timely book challenges conventional business wisdom about competition, secrecy, motivation, and creativity. Orly Lobel, an internationally acclaimed expert in the law and economics of human capital, warns that a set of counterproductive mentalities are stifling innovation in many regions and companies. Lobel asks how innovators, entrepreneurs, research teams, and every one of us who experiences the occasional spark of creativity can triumph in today’s innovation ecosystems. In every industry and every market, battles to recruit, retain, train, energize, and motivate the best people are fierce. From Facebook to Google, Coca-Cola to Intel, JetBlue to Mattel, Lobel uncovers specific factors that produce winners or losers in the talent wars. Combining original behavioral experiments with sharp observations of contemporary battles over ideas, secrets, and skill, Lobel identifies motivation, relationships, and mobility as the most important ingredients for successful innovation. Yet many companies embrace a control mentality—relying more on patents, copyright, branding, espionage, and aggressive restrictions of their own talent and secrets than on creative energies that are waiting to be unleashed. Lobel presents a set of positive changes in corporate strategies, industry norms, regional policies, and national laws that will incentivize talent flow, creativity, and growth. This vital and exciting reading reveals why everyone wins when talent is set free.