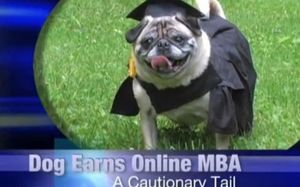 Pete the dog is likely to be the most qualified canine in south London, having recently been awarded a Master’s degree in business.

The awarding body? The American University of London (AUOL), an outfit based online and offering qualifications based on “previous experience”.

The spurious university was uncovered by an investigation by BBC’s Newsnight which discovered that obtaining the degree without any work at all was a relatively easy process, and cost £4,500.  ... AUOL insisted it is “not a bogus university” and defended the robustness of the qualifications it offers.

The eligibility criteria do not appear to be that stringent however, as the Newsnight investigator simply drew up a one-page fake CV for a management consultant named Peter Smith, living in South London. It included 15 years of made-up work experience and a fictitious undergraduate degree from a UK university. The real Pete was actually a dog living in Battersea Dogs’ Home. Nonetheless, just four days after applying, AUOL sent “Pete” an e-mail saying that his application for a degree based on previous experience had been successful and that once they had received his £4,500 fee he would be registered as an MBA graduate within about two weeks.

A quick Google search reveals that Pete is not the first dog to be awarded an online MBA:

Update:  Forbes, Dog Earns MBA---But Can He Deduct It On His Taxes?, by Robert W. Wood

Don't tell me that his obedience school certificate is phony, too!