Something at Wharton doesn't add up.

Applications to the University of Pennsylvania's business school have declined 12% in the past four years, with the M.B.A. program receiving just 6,036 submissions for the class that started this fall. That was fewer than Stanford Graduate School of Business, with a class half Wharton's size. ...

But business-school experts and b-school applicants say Wharton has lost its luster as students' interests shift from finance to technology and entrepreneurship.

Wharton over the past century built its reputation as a training ground for Wall Street titans, but the financial crisis closed off many paths to such careers. The school in the mid-2000s regularly sent more than a quarter of its students to jobs at investment banks and brokerage firms. That figure has slid into the teens. ... Some admissions advisers and Wharton professors say the school didn't react aggressively enough when the spigot of finance jobs was turned off and that recent moves, such as a rebranding campaign begun in the spring of last year, did little to clarify the school's profile. 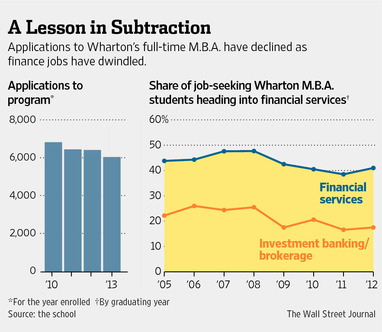 I still suspect that Wharton is a better post-graduate option than most law schools.