Theodore Seto is a tax law professor who likes numbers. During the years, he has applied his critical thinking to several matters of importance to legal education, including rankings.

In fact, in 2007 he reconstructed the methodology used by U.S. News & World Report and issued a report that was critical of the magazine's over reliance on LSAT scores. He did the research for his own school, Loyola Law School, Los Angeles, but shared it with all and was praised throughout legal education.

But his latest statistical analysis has only brought scorn.

Seto has predicted that there will be an undersuapply of lawyers by 2016, if not sooner. His reasoning: Dropping law school enrollment will produce the smallest pool of law graduates per capita in recent history. By 2016, it will be "more than 25% below 2013 and more than 16% below America's modern historic low in 2001," he wrote. ...

Some critics, though, have taken Seto to task, saying his rosy projection is based on faulty reasoning, particularly his position on future demand for legal services, which he wrote would "probably" increase as the population does. ...

Seto says he undertook his analysis to bring some logic to the ongoing argument. Right now, there are two disparate camps: One that claims the situation is dire and unfixable, and another that believes that the current negative employment trends are exaggerated and that the field, in general, is healthy.

In the blogosphere, critics have called Seto a shill for law schools. ...

Robert Anderson, an associate professor at Pepperdine University School of Law, recently wrote an article about lawyer demographics that looked at the number of lawyers in California by age. "By my count, tens of thousands more lawyers are now 55 and older compared to 2003," he wrote. "That means that the reported oversupply of lawyers may well result from demographic factors, rather than permanent changes in the legal market." 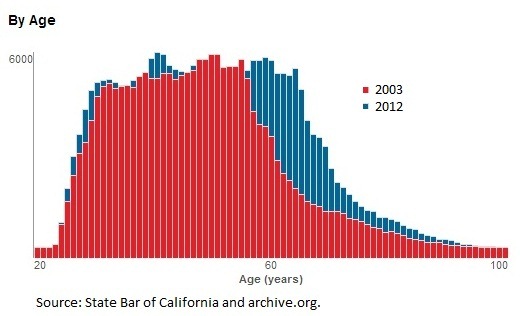 Anderson surmised that the bulge of the baby boom, combined with more lawyers waiting to retire, has led to the increase in older lawyers. That, in turn, has meant fewer jobs for new attorneys. But the tide will turn, as baby boomers can't work forever.

"With the financial markets having recovered near all-time highs, baby boomers may now have the financial resources to retire," he wrote. That may free up jobs for new law school graduates. And even if they don't retire, it is unlikely the baby boomer bulge will persist in the workforce for another 10 years because of the inevitable march of time."

The fewer lawyers the better. Once there is a shortage, businesses can spend more time on growth than dealing with the drain of frivolous and class-action lawsuits.

Keep on selling it. Always Be Closing.

Fun with demographics, speculation, and conjecture is even better than the truth.