Following up on last month's post, Charleston Law School Agrees to Buyout by InfiLaw, but Solicits Other Offers:   this ad appears on Craigslist: 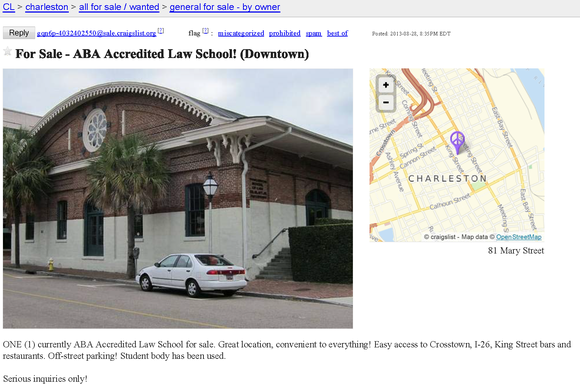 Ever wanted to buy a law school? Well according to Craigslist, now might be the chance.

The Charleston School of Law has been placed on the marketplace website, despite an announcement earlier this week that the for-profit South Carolina university is in negotiations to be taken over by education company InfiLaw System. ...

While the ownership transfer is in process, a CSOL press release released earlier this week does state that there is still time for other offers to be made on the law school. “…the directors [of the school] also indicated that they are willing to consider well thought-out and financially-viable alternative offers” although the school does say that offers should be submitted through their lawyer, with no mention of Craigslist,” the statement said.

There has been some controversy surrounding the potential sale of the university to InfiLaw, however the school remains adamant in its belief that the education company will commit itself to ”maintaining the best of the Charleston School of Law, including our culture and vision, while at the same time bringing its strengths, including investment in the law school in terms of systems, programs and infrastructure, as well as demonstrated commitment to public service.” ...

InfiLaw did not respond to messages from Red Alert Politics asking if they had acquired the intended transfer of ownership by responding to the Craigslist advertisement before press time.