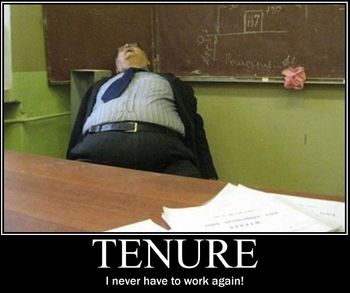 Following up on my weekend posts:

The main body that accredits U.S. law schools is moving to reduce job protections for law professors, who have long enjoyed the security of academic tenure.

The shift comes at a time of plunging student enrollment, and could make it easier for law schools to trim the ranks of full-time faculty, whose salaries consume a considerable share of tuition dollars.

Some law schools that are struggling to balance their budgets have dismissed administrative staff in recent months. Others are offering buyouts to reduce the number of tenured professors or are leaving empty posts unfilled.

Most U.S. colleges and universities have some sort of tenure system intended to protect academic freedom. But law schools are somewhat unusual among professional schools, because the ABA requires them to grant tenure to certain full-time faculty as a condition of accreditation.

Those protections would be scaled back under two competing proposals approved last week at the ABA's annual meeting in San Francisco.

"The problem is, the fixed costs we have sit in tenured faculty," said Maureen O'Rourke, dean of Boston University School of Law and a member of the governing council of the ABA's section of legal education and admissions to the bar. "I understand the need for academic freedom…. But as an industry we have a need for flexibility that we just don't have right now." ...

"Law professors and law deans are paid too much," said Kent Syverud, dean of Washington University School of Law in St. Louis, told the ABA's task force on the future of legal education. "Either we have to be paid less, or we have to do more…. The whole problem of costs probably would go away if our salaries were halved."

Listed below are links to weblogs that reference WSJ: ABA May Remove Tenure Requirement to Allow Law Schools to Pare Faculty as Enrollments Shrink:

This sounds like the same logic that was applied to Wall Street--let's push harder on the people in the middle and continue to pay big salaries at the top--it certainly worked out wonderfully there.

Tenure is a form of compensation. Quite arguably tenure keeps faculty wages lower than they might otherwise be, at least for top performers.