This article is the latest in a series of simple annual studies of the sales of some leading law reviews, undertaken with an eye to getting an admittedly rough and partial sense of the state of publishing in the legal academy. Over the years, the data itself has turned out to be a little bit interesting in spots. More interesting (perhaps), and more amusing and worrisome (certainly), have been the continuing small discoveries that some law reviews report relatively low paid circulation numbers to the U.S. Postal Service (which appear only in tiny-type government forms buried in the rarely read front- or back-matter of the reporting law review), but then tout higher sales numbers in promotional sections of their websites. It is reminiscent of the way some law schools have number-fudged their presentation of other kinds of data to, for example, U.S. News & World Report. The law review-school comparison might prompt the reader to wonder light-heartedly how many law school deans were once law review editors. But answering that question would be too easy, and too far afield from the focus here on publishing in the legal academy. There is, however, another question whose answer might be more interesting, and more likely to lead to intriguing comparisons. The question: How have the size and composition of law review editorial staffs changed over time, in absolute terms and in terms of their relationship to the product they put out? Possible comparisons will probably suggest themselves. This year’s report covers the usual ground relating to paid circulation and associated editorial behavior. It also offers a limited and tentative first take on the production question. 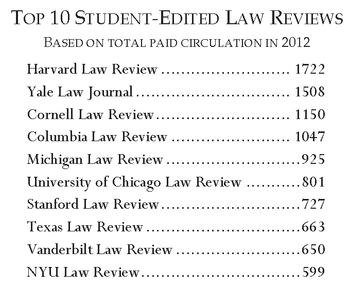 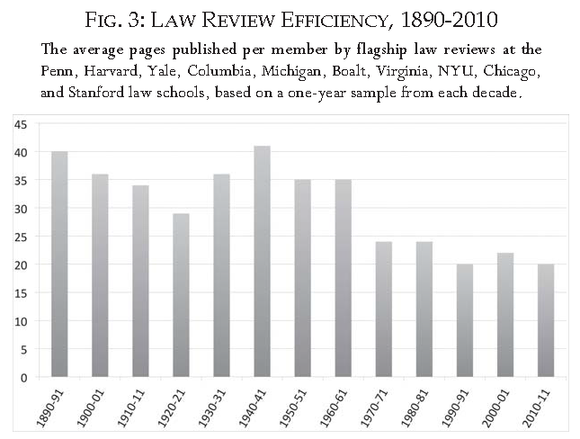 Listed below are links to weblogs that reference Law Review Circulation and Efficiency Continue to Plummet (2012):

Using number of pages as the numerator in a metric called "efficiency." CLASSIC law review perspective.

My apologies if I'm missing something, but do the paid circulation totals include the 200 law school libraries or so that (presumably) all purchase hard copies of these journals so that they ensure that students have access to all of these resources in quadruplicate (i.e., hard copy, Westlaw, LexisNexis, and Hein Online), if not more (e.g., SSRN, Digital Commons, etc.)?