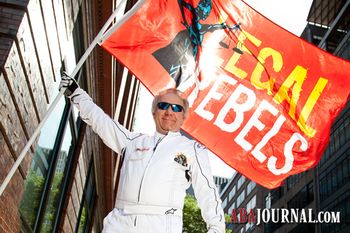 Kudos to John Mayer, Executive Director of the The Center for Computer-Assisted Legal Instruction ("CALI"), who has been selected by the ABA Journal as one of 2013's Legal Rebels:

“It’s been fun and frustrating,” John Mayer says about his work in the sometimes stuffy legal profession. “It’s fun pushing the envelope, but frustrating because people do not want to change.”

Mayer is now leading what could be a very big change in legal education. The Center for Computer-Assisted Legal Instruction, a nonprofit consortium of law schools, produces online interactive tutorials written by law professors. “It gives students a hypothetical and a flowchart that walks through various choices,” says Mayer, who’s known for donning whimsical attire at the annual Conference for Law School Computing—dressing up as a race car driver this year and as a Lego figure last year.

Mayer joined CALI in 1994 after seven years as director of computing services at Chicago-Kent College of Law. Shortly after starting, center leaders told him the organization might shut down. For his job interview, Mayer had brought a list of 50 project proposals. Those that came to fruition include software for faculty to write tutorials and book readers like the Franklin AnyBook.

“This was 1994, before widely available Internet,” he says. “Faculty were just starting to get PCs on their desktops.”

Mayer and his wife, Jane McBride, a lawyer with the state attorney general’s office, founded the animal advocacy group Illinois Humane. “When you look at some of the problems these animals face, your problems are small in comparison,” he says.

CALI does wonderful work on a variety of projects for faculty, including A2J Author, Classcaster, eLangdell, Free Law Reporter, InstaPoll, Lawdibles, Legal Education Commons, LibTour, MediaNotes, and Webinars and Online Courses, in addition to their bread and butter CALI lessons for students (Jim Maule has produced over 250 tax lessons, which I highly recommend). (Disclosure: I am Vice President of the CALI Board of Directors.)

Here is the ABA's description of its Legal Rebels:

Excuse us for waving our own flag, but we are exceedingly proud of our fifth-year selections for the ABA Journal’s Legal Rebels.

Our annual honors program for the change leaders of the legal profession has again found, thanks to your nominations, 10 outstanding new members. They join the 81 free thinkers selected in the previous four years of Legal Rebels. And though this year’s program was open to anyone in the legal services business, an interesting pattern arose as the final selections were made: Seven of our 10 choices are directly connected to legal education. Well, with the disruptive innovations of technology remolding the practice of law, it’s only normal that those charged with training the next generations of legal service providers are reshaping the way those generations are taught and what they learn.

Listed below are links to weblogs that reference John Mayer, Legal Rebel: