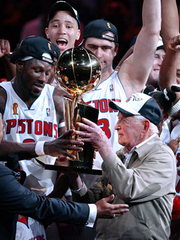 IRS lawyers are defending a tax bill of more than $2 billion sent to the estate of the late William Davidson, reiterating claims that the former Pistons owner and industrialist didn’t properly account for huge gifts to family members and the value of stocks put in trust for his heirs.

In a 46-page filing made public in U.S. Tax Court in Washington, D.C., on Wednesday, lawyers for the Internal Revenue Service answered the estate representatives’ arguments filed in June saying the tax bill — $2.8 billion in all — was wildly inflated and that, despite a huge IRS notice of deficiency, the estate didn’t owe anything more. ...

It could set up one of the largest such estate tax fights in U.S. history. No one keeps statistics on the size of tax petitions, but when the Free Press first broke news of the filing two months ago, experts couldn’t think of a recent one with as much money at stake.

The estate tax bill alone — $1.9 billion — would represent more than one-tenth of the $13 billion collected through that tax nationwide in 2010, when taxes on most estates of those who died in 2009, like Davidson, were paid.

Born in Detroit, Davidson built Auburn Hills-based Guardian Industries into one of the world’s leading makers of glass, automotive and building products. He went on to own the Detroit Pistons, the WNBA’s Detroit Shock and NHL’s Tampa Bay Lightning. He died March 13, 2009, at age 86, with a net worth estimated at more than $3 billion.

Listed below are links to weblogs that reference IRS Hits Estate of Former Detroit Pistons Owner With $2 Billion Tax Bill: