Burk: The New Normal in the Job Market for New Lawyers

Bernard A. Burk (North Carolina), What's New About the New Normal: The Evolving Market for New Lawyers in the 21st Century:

Everyone agrees that job prospects for many new law graduates have been poor for the last several years; there is rather less consensus on whether, when, how or why that may change. This article analyzes historical and current trends in the job market for new lawyers in an effort to predict how that market may evolve.

The article derives quantitative measurements of the proportion of law graduates over the last thirty years who have obtained initial employment for which law school serves as rational substantive preparation (“Law Jobs”). In comparing entry-level hiring patterns since 2008 with those in earlier periods, a significant development emerges: While other sectors of the market for new lawyers have changed only modestly during the Great Recession, one sector — the larger private law firms colloquially known as “BigLaw” — has contracted six times as much as all the others. Though BigLaw hiring has historically accounted for only 10%-20% of each graduating class, it is responsible for over half the entry-level Law Jobs lost since 2008.

While some observers predict a return to business as usual as the economy recovers, this article is skeptical of that account. The article identifies significant structural changes in the way that the services traditionally provided by BigLaw are being produced, staffed and priced that diminish BigLaw’s need for junior lawyers both immediately and in the longer term. These observations suggest that entry-level BigLaw hiring, and thus the market for new lawyers overall, will remain depressed below pre-recession levels well after demand for the services BigLaw has traditionally provided recovers. At the same time, new lawyers’ job prospects may nevertheless improve as the contraction in the legal academy now underway reduces the number of new graduates competing for work. 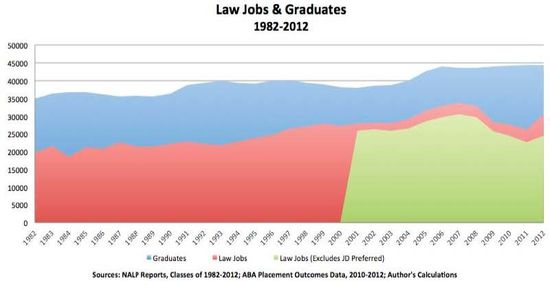 Listed below are links to weblogs that reference Burk: The New Normal in the Job Market for New Lawyers:

Don't you think that BigLaw is hiring all these recent graduates for document review instead of real legal jobs?

Not discussed but must be: law school should be shortened to 2 years even to 18 months for those who don`t have to work.