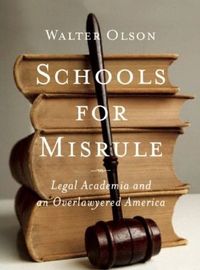 For over half a century, the Ford Foundation has quietly worked to turn the nation’s law schools into agents of Sixties-style “social change.” Other donors like Carnegie, Soros, and MacArthur have followed Ford’s path, and the result can be seen in landmark Supreme Court decisions, the plethora of politicized “legal clinics” on campus, and the courts’ growing willingness to defer to “international law.” ...

The high hopes for public interest law formed in the Sixties have not really worked out as planned. Litigation aimed at social change turns out to be rife with unintended consequences. ... As for the law school clinics, when it comes to ideologically charged litigation, they get enough done to appall many on the Right but not enough to satisfy many on the Left. ... Projects at many leading law schools now promote the view that the United States is a systematic violator of domestic human rights and should submit to the corrective authority of such transnational bodies as the U.N. Committee for the Elimination of Racial Discrimination and the new International Criminal Court. Just as public interest law confers great power on the litigation groups that file the suits and determine their agenda, so the fashionable new world of international human rights law confers much power on complaint-filing groups. It also places great weight on the claimed consensus of something called the “international community.” ...

Ford and its philanthropic confrères will continue— through their extraordinarily strong position in the law schools—to set much of the agenda for legal change for years to come.

Listed below are links to weblogs that reference The Ford Foundation: Shaping America’s Laws by Re-Making Her Law Schools:

And the Olin foundation is no more. How much influence do you think lingers?

I see a lot of baseless assertions and precious few facts.

How much money has Ford given, when and to which law schools? What strings were attached? How large a percent of the law schools revenue came from Ford?

How much money have other foundations with different agendas given? More or less than Ford? How has giving shifted over time? How is it concentrated at different law schools?

Olson's analysis could be summarized as follows:

If the Ford Foundation is funding all the law schools as Mr. Olson contends rather than tuition, then I do not worry so much about the students.