Pasquale and Simkovic Respond to Tamanaha

Professor Tamanaha's post today expresses deep skepticism about the predictive value of the article "The Economic Value of a Law Degree." Unfortunately, his caution about extrapolation is mainly reserved for academic work he disagrees with.  For Tamanaha, the prophets of lawyers' doom are far more credible than this empirical study. I don't think that's fair, for several reasons I'll give below. ...

What we're seeing here is less a law problem, than a capitalism problem.  Too much wealth is concentrated at the top, and has stopped flowing through the economy generally.  The answer here is to beef up programs like income-based repayment, funded by more progressive taxes on the lucky and successful in today's winner-take-all economy. That was part of the funding mechanism for the Affordable Care Act, and should apply in education as it has in health care.

For someone who thinks and writes only about law schools, every problem for law graduates may seem like a pathology of legal academics.  Take a broader view, and a more accurate picture emerges.

BT Quote: There is no doubt that including 1992 to 1995 in their study would measurabley reduce the 'earnings premium.'"

Response:  Using more years of historical data is as likely to increase the earnings premium as to reduce it

We have doubts about the effect of more data, even if Professor Tamanaha does not.

Without seeing data that would enable us to calculate earnings premiums, we can’t know for sure if introducing more years of comparable data would increase our estimates of the earnings premium or reduce it.

The issue is not simply the state of the legal market or entry level legal hiring—we must also consider how our control group of bachelor’s degree holders (who appear to be similar to the law degree holders but for the law degree) were doing.   To measure the value of a law degree, we must measure earnings premiums, not absolute earnings levels. ...

There is nothing magical about 1992.  If good quality data were available, why not go back to the 1980s or beyond?   Stephen Diamond and others make this point. ...Our sample from 1996 to 2011 includes both good times and bad for law graduates and for the overall economy, and in every part of the cycle, law graduates appear to earn substantially more than similar individuals with only bachelor’s degrees. 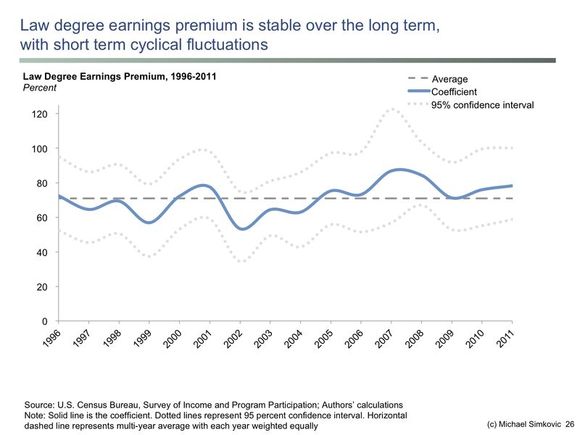 This might be as good a place as any to affirm that we certainly did not pick 1996 for any nefarious purpose.  Having worked with the SIPP before and being aware of the change in design, we chose 1996 purely because of the benefits we described here.  Once again, should Professor Tamanaha or any other group wish to use the publicly available SIPP data to extend the series farther back, we'll be interested to see the results.

Listed below are links to weblogs that reference Pasquale and Simkovic Respond to Tamanaha:

Is Mr Bowen's position that McKinsey has never profited from reducing average pay? It would seem like a perfectly rational strategy to increase shareholder value.

You know who else worked at McKinsey? Michael Simkovic, author of the Million Dollar Law degree study. Go figure.

@No., breh.: Agree with the problem stated in your #1 point about comparing subsets. I also question, and perhaps this is addressed in the original paper (which I have not read), whether the opportunity cost of three years' lost income while at law school, plus the cost of law school itself, is included as an offset to the lifetime earnings premium.

Per Prof. Pasquale's #3 point, the hyperlink purporting to prove that McKinsey profits from "devising plans to cut the pay of average workers and further enrich those at the top (or the multinational corporation client)" links to a single sensationalistic 1998 book on sale at Amazon. If that's what passes for sufficient documentation for an argument at Maryland, then presumably Prof. Tamanaha is correct to raise questions about the rest of the study. Having spent several years at McKinsey, I can confidently, from my own personal experience, state that it is a fundamental mischaracterization of what McKinsey does (and it's irrelevant to his argument).

I can't understand how that graph has any value without it including the exponential growth in tuition and fees at law schools during this period. If the answer to that question is "programs like IBR", is it fair to attribute those savings to the JD earnings premium as opposed to progressive tax policy? Seems like they're having their cake and eating it too...Additionally, when the summary, which is what most people will read, is "JD Earnings Premium $1,000,000", doesn't this study do less to promote accurate information as opposed to harming potential law students that will enroll in "bottom 100" law schools? If the study is not aimed at informing those people, how much value does it really have? It seems impossible to control for all variables, so to communicate such a simplified message appears harmful. The correlation/causation problem cannot be meted out. While making 40k as a state attorney while paying only $130/month on $120,000 worth of debt may look good if a comparable BA in my position would have only started at 34k for econometric purposes, I can tell you the subjective experience does not feel the same way that a prospective law student that reads they're in for $1,000,000 lifetime earnings premium probably does. I don't think the study does anything to communicate this issue. And I willfully devalue any publication that fails to do so.

One other thought I neglected to add earlier:

Isn't there one fundamental difference between recent law graduates and past law school graduates in that the number of people enrolled in law school/granted JDs has substantially increased over time (pick your own arbitrary relevant timeframe)?

Quick Googling got me the following:

Which brings another thought to mind -- aren't the lost earnings incurred during an unpaid internship yet another lost opportunity cost for many JD's?

My apologies for both rambling posts, but I figure since it's the internet I don't have to be extremely articulate.

Ah, the old "you're a communist" argumentative strategy -- a telltale sign of true desperation on the scammer front!

"What we're seeing here is less a law problem, than a capitalism problem."

Wow. If that Maoist sentiment doesn't spur readers to run for the hills, nothing will.

Up front, I'm highly skeptical of the study, but I do think there is some value here.

Couple of brief questions/comments that I had:

1. JDs are a subset of BAs, and "people who got a JD" seems like a very poor comp for "people who got a BA." LSAT scores of law school admittees alone seem to indicate that JD's are a substantially more talented pool than college grads generally. I think that the fact that 40% or so of law grads are not lawyers but still enjoy an earnings premium is some evidence supporting this, particularly given the difficulty of finding a non legal job with a typical libartist/JD combo. In brief: var"getJD" and var"makemore$" are both dependent on var"motivation-ability-connections-other". More briefly: correlation=/=causation

3. How can one reasonably evaluate the value of a law degree without considering the severe stratification in job opportunities between graduates of different law schools? Perhaps a better comp to, say, the bottom 25% of BA earners is all earners from the bottom 25% of law schools, however one might define that. That seems to at least roughly account for some of the effects of ability, etc, although I don't know where one would be able to get that data.