NY Times: The Return on College: A Global Perspective

New York Times:  The Return on College, Around the World, by Catherine Rampell:

As my colleague Eduardo Porter wrote this week, there are major returns from going to college. This is true around the world, but it is especially true in the United States.

According to a report released this week by the Organization for Economic Cooperation and Development, across the developed world the average person who has graduated from college (either two-year or four-year) and has any earnings makes about 57% more than a counterpart with no more than a high school education. In the United States, the comparable earnings premium is 77%. 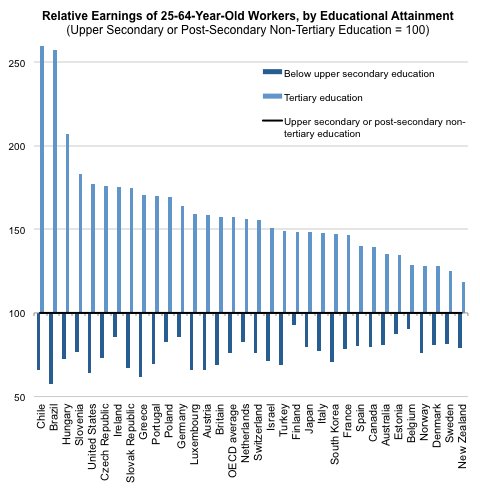 Only four OECD member countries — Chile, Brazil, Hungary and Slovenia — have a higher earnings premium. (The premiums are higher, I should note, if you look only at the universe of people with four-year degrees; across the OECD, the premium is 68%, and in just the United States, it’s 84%.) ...

You could argue that with the private returns so high to attending college, maybe the United States government is right not to provide more subsidies for higher education. But here’s the thing: the public returns to college-going are also huge in the United States, higher than they are in almost every other OECD country.

Here’s a chart showing both the public and private returns of tertiary education for the average man in each developed country. 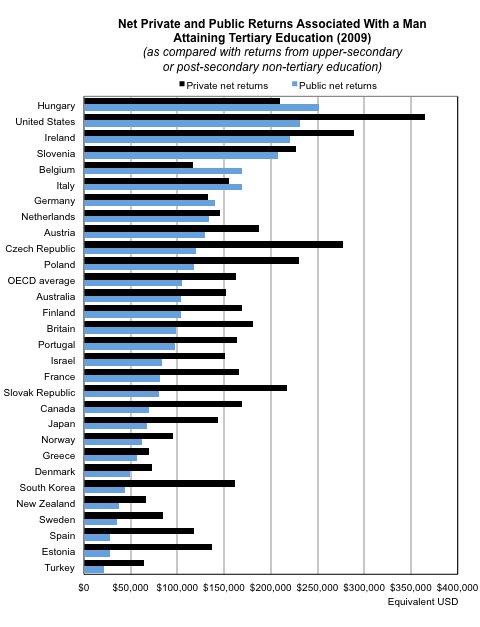 As you can see, the average return to taxpayers is $230,722 in the United States, versus less than half that, $104,737, across the developed world. In other words, there should be strong monetary incentives not only for individual Americans to go to college, but also for taxpayers to help students actually graduate.

Listed below are links to weblogs that reference NY Times: The Return on College: A Global Perspective :

"In other words, there should be strong monetary incentives not only for individual Americans to go to college, but also for taxpayers to help students actually graduate."

Baloney. Earnings come primarily from ability to learn on the job and willingness to work hard. College attendance might RESULT from those traits, but it definitely does not CREATE those traits.

College is appropriate only for people with high ability to learn and willingness to work hard. Sending others to college wastes their time and the taxpayers' money. The US needs to reduce college attendance, not increase it. We need more apprenticeship opportunities for high school graduates. That way young people can earn money while they learn something useful rather than accumulating a mountain of debt taking useless classes.