More on The $1 Million Value of a Law Degree

Following up on yesterday's post, What Is the Economic Value of a Law Degree -- $1 Million?:  Michael Simkovic (Seton Hall), Brian Tamanaha Says We Should Look at the Below Average Outcomes (And We Did):

Brian Tamanaha’s response to The Economic Value of a Law Degree, as reported by Inside Higher Education, doesn’t capture the contents of the study. According to IHE, Tamanaha said:

The study blends the winners and losers, to come up with its $1,000,000, earnings figure, but that misses the point of my book: which is that getting a law degree outside of top law school – and especially at bottom law schools –is a risky proposition . . . Nothing in the article refutes this point.

Professor Tamanaha is correct that the $1 million figure is an average, but we didn’t write a 70 page article with only one number in it. The Economic Value of a Law Degree not only reports the mean or average—it reports percentiles, or different points in the distribution. At the 75th percentile, the pre-tax lifetime value is $1.1 million – $100,000 more than at the mean. At the 50th percentile, the value is $600,000. At the 25th percentile, the value is $350,000. These points in the earnings distribution do better than breaking out returns by school—they allow that even some people at good schools have bad outcomes (and vice versa). Thus we capture, and at length, exactly the concern Tamanaha expresses. 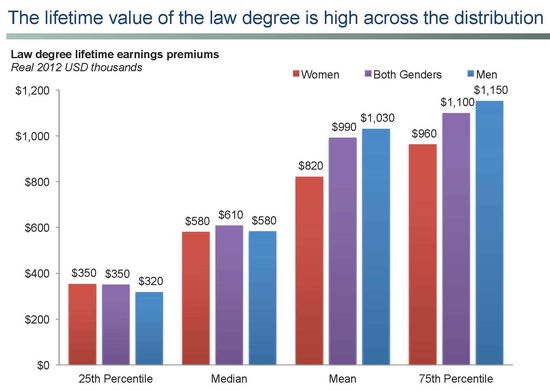 ... People with law degrees are not immune from risk. No one is. But the law degree reduces the risk of financial hardship. Law degree holders face significantly less risk of low earnings than those with bachelor’s degrees, and also face lower risk of unemployment. Increased earnings and reduced risk appear to more than offset the cost of the law degree for the overwhelming majority of law students.

Frank McIntyre and I did not miss the point of Brian Tamanaha’s Failing Law Schools. Rather, we disagree with his conclusions about the riskiness of a law degree because data on law degree holders does not support his conclusions. We discuss Tamanaha’s analysis on pages 20 to 24 of The Economic Value of a Law Degree.

We believe that Professor Tamanaha’s views deserve more attention than we could give them in The Economic Value of a Law Degree. Because of this, last Spring, we also wrote a book review of Failing Law Schools, pointing out both the strengths and weaknesses of his analysis. We will make the book review available on SSRN soon. If Professor Tamanaha disagrees with our estimates of the value of a law degree at the low end, we’re happy to hear it. But he should not say that we ignored the issue. We look forward to a productive exchange with him, on the merits.

I will make three points/questions in response. Against the argument in my book, you apparently believe that expensive low ranked law schools are not a risky financial proposition for students–that even most of the students who attend these schools will end up obtaining an earnings premium of hundreds of thousands of dollars. That is good news, if correct. But let’s use concrete examples to explore this (which is how my analysis was structured).

Thomas Jefferson Law School class of 2012 had average debt of $168,800–adding interest accrued and average undergraduate debt brings the total to $200,000 on graduation day. Only 29% had landed full-time jobs as lawyers nine months after graduation, the majority earning $60,000 or less. (Notice, by the way that the non-lawyer proportion of the class (7/10) is much higher than the pool you studied (3/5), which presumably will bring down the expected return of the group.)

Is it your contention that–when tuition, opportunity cost, and interest are subtracted–TJLS students will still earn hundreds of thousands (statistically speaking of course)? And the same goes for Cal Western, NYLS, Southwestern, Phoenix, etc, all with very high debt and poor job results.

Or put it more concretely, would you tell a friend that she will probably come out handily ahead even if she went to one of these law schools at full price? (I use “she” because I would like to hear an answer for a female student as well as male.)

Ken’s question (above) cannot be severed from the answer to my question. My book is an examination of the current situation for students and prospective students, whereas your analysis extrapolates from the results of the past generation. Not only has tuition nearly doubled in the past dozen years at private law schools (and debt with it), we are now in the worst market for legal jobs in decades (according to NALP). The legal job market appears to be firming up, recent layoffs aside, but there is nigh universal agreement that the heady days of the mid-2000s are gone for good (NALP has repeated this).

You argue that this is merely a cyclical down turn (not structural) and things will soon return to the historical norm you claim exists. Let’s hope so. But if you are wrong, then isn’t it true that your economic return figures are overly optimistic for current and future students? (Economist say that people who enter job markets during recessions can expect reduced earnings over their careers–which I assume applies to a downward structural adjustment in a given field.)

Finally, your claim about the earnings premium from a JD attributes that premium to the skills and knowledge students obtain while in law school. As I argue in my book, law students are typically a smart and motivated bunch, and would have obtained above average earnings in other fields with their talents had they not gone to law school. You claim that you statistically show that the additional earnings obtained by non-lawyers are from the JD degree, not from their personal abilities. Please tell us how confident you are in this conclusion. (Your analysis appears to leave much leeway on this crucial point.) After all, if it is true that most of the premium you show is from their ability, not the JD, then the non-lawyers would have been far better off had they not gone to law school.

Listed below are links to weblogs that reference More on The $1 Million Value of a Law Degree:

In addition, this study concludes that law school is a positive for the 25th percentile of grads. These are people who are today very unlikely to break into the actual practice of law.

$350,000 (NPV) pre-tax isn't that great a return for three years out of the workforce and $200,000 in cost of attendance at somewhere around 7% weighted interest. Also the top line number assumes a working life starting at age 23. Many law students start out later than that in life.

All in all it looks like for at least 25% of students law school is a bad idea. That's quite a large proportion. The conclusions could have been framed quite differently.

- Cross-posted from Above The Law (with some paraphrasing):

The central assumption in this paper is the validity of synthetic work-life earnings in the 21st century legal profession. For the non-labor economists reading this, synthetic work-life earnings means that the future earnings of recent JDs are predicated on the lifetime earnings of old JDs. The cohort used appears to be ages 25 through 65. Bear Stearns and Lehman made this assumption w/r/t to subprime lending, to their doom. Bubble inflators have ignored the sage advice that "past performance is no guarantee of future returns" to their doom since that thing with the tulips in the Netherlands in the 1600's. Yet, it is the lynchpin for this study. Huh.

The study also chooses 2008 as the most recent date to include lawyers' earnings and employment rates. Huh.

And it fails to take into consideration student loans when calculating lifetime earnings premiums. Or taxes. Huh.

And it improperly compares lifetime wages of JD holders to bachelors holders, instead of other groups who spent a similar amount of time and money in school, like doctors, dentists, MBAs, and MS holders in Computer Science. Huh (and aside from the MDs and DMDs, all of those groups will have spent less on their educations).

Anyways, this central dependence on the synthetic work-life earnings assumption ignores the possibility that the enormous structural changes in law, as acknowledged by everyone from the ABA to the NALP to the BLS, represent a Black Swan for the legal profession - even as the paper otherwise incorporates data from the NALP and BLS. To analogize, Polaroid and Kodak had record earnings right before the advent of digital cameras. Now they no longer exist. Digital cameras were a black swan. I'm sure the highest salaries for phaeton builders were in the years right before the Model T was introduced. Concorde mechanics probably earned their highest salaries just before the planes were pulled out of service because of safety concerns. Typewriters were a black swan for scriveners. One can go on and on.

The advent of automated, predictive technologies for discovery and drafting, the continual relaxation of the boundaries of UPL and ensuing competition between lawyers and (inter alia) less-expensive compliance officers, real estate agents, paralegals, overseas professionals, consultants, accountants, etc et al; the exploding growth of the LPO sector, and so forth may prove to be a Black Swan for lawyers. The eventual repeal of IBR/PAYE and/or PSLF would be a Black Swan for law students. The repeal of GradPLUS loans (as Senators Simpson & Bowles desire, as well as the higher ed foundation duopoly of Gates and Lumina) would be a Black Swan for law schools. But the paper waves aside all of these dark scenarios with one rather trite phrase, we can't predict the future, even as they go back to predicting the future insomuch as the career trajectories for new lawyers (and new JD holders not working as attorneys) will exactly track the path of JD recipients who graduated from law school in the 1970's. It's facially absurd.

Incidentally, Seton Hall Law School, where Simkovic works, costs about $70,000 per year. That's a sticker cost of $210,000. Throw in bar expenses, the average undergrad debt, and accumulating interest (since no graduate student loans are subsidized anymore), and we are at about $260,000 or so. On a 20 year payback, one must include another $220,000 or so in additional interest. So, that's $480,000 to attend an average undergraduate college and Seton Hall Law School. That more than eradicates the supposed earnings gains from the bottom 25th percentile of lawyers, and from what I've seen of Seton Hall's ABA disclosures, not too many of their graduates can be presumed to be making more than that 25th percentile. Huh.