Will Taxes Drive Dwight Howard to Sign With Rockets Rather Than Lakers? 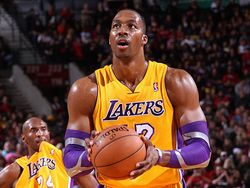 Seven-time NBA all star Dwight Howard is a free agent and, under the NBA's "Larry Bird Rule," can re-sign with the L.A. Lakers for a maximum of $118.0 million over five years (7.5% annual increases over his existing contract) or with any other team for a maximum of $87.6 million over four years (4.5% annual increases).  The Houston Rockets has emerged as a likely bidder for Howard's services, and several tax folks have run the numbers and concluded that Howard would receive more after-tax income by signing with the Rockets rather than the Lakers, based on California's 13.3% top marginal income tax rate and the absence of a state income tax in Texas, after taking into account the application of various state and local "jock taxes."

Listed below are links to weblogs that reference Will Taxes Drive Dwight Howard to Sign With Rockets Rather Than Lakers?:

I really don't understand the numbers the CPA in NJ is publishing, because it seems (amazingly) that she doesn't take account of the possibility that California tax is deductible against federal tax --

However, just using the "What if" form in Turbotax 2012, and checking the box to use 2013 rules, it seems that total federal tax, including $608k of AMT, is about $6.8 million, as compared to her $8.6 million. As a result, Howard nets substantially *more* in California than if he takes the Houston maximum.

This seems like such an elementary mistake that it makes me doubt Turbotax, but there it is.

I do not know what percent of his money comes from endorsements, etc. He always has to consider that and the impact on total after tax earnings based on location. Then there are other intangibles such was where he is more likely to get a ring, assuming he cares about such matters. Sports is a business with an emotional component for the stars.