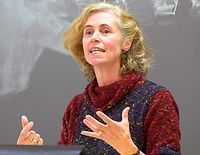 Boston Globe:  Life Points: For Legal Scholar Clare Dalton, a Sharp Turn from Academia to Acupuncture Was a Natural Fit:

Robin Parker lay on the massage-style table as the acupuncturist took her hand and felt her pulse. Parker, 53, has allergies, and her throat was itchy. She’d been here before, for sessions that had relieved her stress and stopped an incipient cold.

Parker has never liked needles, but she didn’t seem to mind the tiny ones that were being inserted above her waist. After treatment, she reported that her sinuses and throat were symptom-free.

“I know I’m in healing hands here,’’ said Parker, who lives in Cambridge.

Those hands belong to Clare Dalton, who made a name nationally when she sued Harvard in 1987 for sex discrimination in denying her tenure at the law school. Usually such suits are aimed at gaining tenure, but Dalton had no intention of returning to Harvard. In 1988, she went across the Charles River to Northeastern University Law School and used her settlement money to start a domestic violence institute devoted to research, education, and service on behalf of victims. She oversaw law students who represent battered women in court, and she has received numerous awards for her work in domestic violence law and feminist legal thought.

A year ago, however, Dalton left academia for acupuncture, an odd career path for a distinguished legal scholar. ...

Dalton — who since 2005 has been legally separated from her husband, Robert Reich, the US secretary of labor in the Clinton administration — says their two sons have had different reactions to her metamorphosis.

Adam Reich, 30, a doctoral student in sociology at the University of California Berkeley, says he was able to adjust to his mother’s transition because it was gradual. “That being said, the first time she started talking about her chi was something of a surprise,’’ he says. “But at this point, I’m completely on board, and have had the pleasure of being treated myself.’’

Dalton says that her younger son views her leaving academia as a vindication of his similar decision.

“I dropped out of high school when I was 16 in order to pursue show business,’’ says Sam Reich, 26, who is head of original content for CollegeHumor.com. “I’d like to think that I inspired her to be braver, but she’s always been brave. I mean, this woman sued Harvard. Maybe I just inspired her to be more reckless.’’ At her graduation from acupuncture school, Sam says, he got teary-eyed “in a weird child-parent pride reversal.’’

Dalton also gets emotional when talking about her new gig. “I love it,’’ she repeats, each time placing her hand on her chest. “I love working one on one with people who are heroic in the ways they are putting their lives together in the wake of difficulties and pain.’’

Does she miss law?

“What I miss is teaching,’’ she says. “But I felt it was time to hand that work on to a new generation and that I had made my contribution.’’

Lois Kanter, whom Dalton hired 20 years ago to help develop the domestic violence institute, knew of Dalton’s growing interest in the healing arts, so she wasn’t too surprised about her career change. Still, she did ask: Why acupuncture?

“Her answer made perfect sense, and was so consistent with my view of her as a person rather than a legal colleague,’’ says Kanter, director of the domestic violence institute. “She said that she has always wanted to be a ‘hands-on’ healer, and this change in career would provide her with the opportunity to work directly with individuals in ways that she believed could really make a change in their lives.’’

Dalton certainly has changed her own life, and she believes many workers in her generation are doing the same. For some, it may be volunteering, or working part time, or freelancing.

“But for others it may be as it has been for me — an opportunity to walk back to an earlier fork in the road and set off down a path not taken,’’ she says.

Listed below are links to weblogs that reference Law Prof Leaves Academia for Acupuncture:

It sure helps to be quite wealthy. In addition to (ostensibly) having an interest in ex-husband Robert Reich's VERY substantial assets, I do recall her listing her erstwhile Cambridge residence for somewhere between $3m and $3.5m several years ago. Why can't all the unemployed new law school grads of the world do the same, right? Obviously we're just too lazy to sell our Brattle Street real estate holdings...

It sounds like a person with a lot of energy who wants to try more than one thing. If that seems odd, it only shows our own limitations.