Gabilondo Named One of 50 Most Influential Minority Law Professors 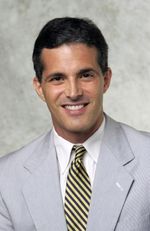 José Gabilondo (Florida International) is the only Tax Prof named to Lawyers of Color's 2013 50 Under 50 List ("The Most Influential Minority Law Professors 50 Years of Age or Younger") in its Law School Diversity Issue:

José Gabilondo joined the College of Law after working in financial market regulation at the U.S. Department of the Treasury, the U.S. Securities and Exchange Commission, the Office of the Comptroller of the Currency, and the World Bank. He served as Associate Dean for Academic Affairs from 2009-2011. Professor Gabilondo teaches tax and corporate finance. He is co-author of Corporate Finance Debt, Equity, and Derivatives Markets and their Intermediaries in the American Casebook Series. He is a nationally recognized commentator in the Spanish-language media on financial and economic matters.

Listed below are links to weblogs that reference Gabilondo Named One of 50 Most Influential Minority Law Professors:

The guy in the picture looks like a regular ol white male.