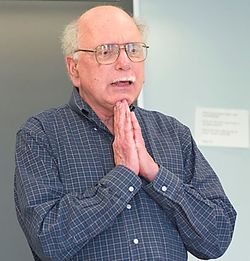 It is with a heavy heart that I report the unexpected passing of our colleague, Dan Schaffer, who died Wednesday night of as yet unidentified causes.

Professor Schaffer joined the Northeastern law faculty in 1970 and was named Professor of Law in 1974. After more than 40 years of dedicated teaching and research primarily in the tax field, his many contributions are well known to our community. Virtually every graduate of the law school who studied tax while here had the benefit of Dan's clear, well-organized and rigorous teaching style.

Daniel C.Schaffer, of Brookline, MA passed away on Wednesday, May 8, 2013 as a result of complications following surgery. He was the loving husband of Sally Bould and of the late Judith (Wolch) Schaffer, the devoted father of Noah Schaffer, the son of the late Leo & Rae Schaffer and the brother of Jerome Schaffer.

Daniel's family remembers him as a kind and warm father and husband who always there in times of need. "He always encouraged us to follow our passions the way that he had," said his son Noah. "There was only one topic that I never felt comfortable discussing with him, and that was whether he would someday retire. And, as it turns out, he never did."

In lieu of flowers, donations may be made to the Daniel C. Schaffer Scholarship Fund at Northeastern University School of Law, 400 Huntington Ave., Boston, MA 02115.

Listed below are links to weblogs that reference Death of Dan Schaffer: