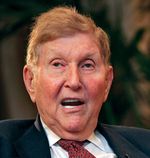 In 1972, President Richard Nixon cruised to re-election. “The Waltons” premiered on CBS. And Sumner Redstone, who wasn’t yet a global media mogul, made a taxable gift to his children and failed to file a return.

At least that’s what the IRS is maintaining 41 years later.

The IRS told Redstone earlier this year that he owes $1.1 million in taxes and penalties, plus interest, because of the gift. The case involves stock in the family’s National Amusements Inc. received by Redstone’s son, Brent, and his daughter, Shari, after the settlement of an intrafamily lawsuit.

“This is unheard of,” said Richard Behrendt, a former IRS estate and gift tax auditor who is now director of estate planning at Robert W. Baird & Co. Inc. in Milwaukee. “I can’t remember ever hearing of anybody going back 41 years to raise an issue. It’s really unprecedented in my experience.”

Redstone, the billionaire chairman of Viacom and CBS, argues in his April 10 petition to the U.S. Tax Court that what the IRS called a taxable gift was instead the result of an intrafamily lawsuit and an “ordinary business transaction.”

Listed below are links to weblogs that reference Billionaire Redstone Challenges IRS on Tax for 1972 Gift:

This blows the record retention schedules I have provided clients.