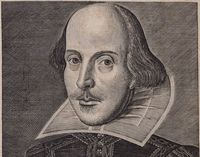 Hoarder, moneylender, tax dodger — it's not how we usually think of William Shakespeare.

But we should, according to a group of academics who say the Bard was a ruthless businessman who grew wealthy dealing in grain during a time of famine.Researchers from Aberystwyth University in Wales argue that we can't fully understand Shakespeare unless we study his often-overlooked business savvy.

"Shakespeare the grain-hoarder has been redacted from history so that Shakespeare the creative genius could be born," the researchers say in a paper due to be delivered at the Hay literary festival in Wales in May....

He was pursued by the authorities for tax evasion, and in 1598 was prosecuted for hoarding grain during a time of shortage.

Listed below are links to weblogs that reference William Shakespeare, Tax Cheat:

Just another "Hollywood" insider who just wants everyone else to pay more taxes.

Everyone wants to talk about Shakespeare. No one mentions Cervantes, who worked as a tax collector and went to prison in Seville in 1597 for three years because he failed to properly account for government funds.

Yep, think of all the playwrights whose truly remarkable dramatic abilities have been overshadowed by their grain hoarding...