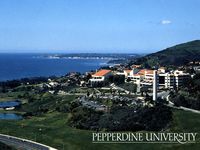 Following up on Tuesday's post, Chronicle of Higher Education, How Conservatives Captured the Law, and in particular this statement:

Academics associated with the Federalist Society have educated a new generation of conservative law students, played a role in the rise of openly conservative law schools like Pepperdine's and George Mason's, and succeeded in gaining respect and traction for conservative legal ideas.

The idea is that institutions offer bundles of attributes to consumers (applicants), and each consumer chooses the bundle that, from her point of view, maximizes the achievement of her preferences as she understands them at the moment of choice. I used Pepperdine as my primary example, because it’s a school with a strong public law faculty that leans more conservative than other institutions (but I could have offered others – San Diego and St. Thomas in St. Paul, for example). So, consider a conservative student applying to Harvard and Pepperdine. If she gets in to Harvard, she’s certainly going to get into Pepperdine, and the LSAT and GPA numbers suggest pretty strongly that she’ll do better at Pepperdine than at Harvard. So, her choice is between (a) a liberal-leaning school where she’ll probably do all right but might not be at the top of the class, and the job opportunities associated with having a Harvard degree and (b) a conservative-ish law school where she’ll probably do quite well, with the job opportunities available to a student at the top of Pepperdine’s class.

The article concludes with an identification of those law schools whose academic reputation scores have improved or declined the most during the fifteen year period, along with a brief discussion of some potential causes for those changes.

... Undoubtedly there are a number of other ways in which a school’s administration can, at least under certain circumstances, significantly influence their school’s academic reputation scores. It is quite possible, for example, that Pepperdine’s substantial gains over the period (a rise of .4) could in some ways be related to the notoriety of their dean (Ken Starr). Chart Q plots Pepperdine’s academic reputation scores with the timing of Starr’s arrival and departure at the school. 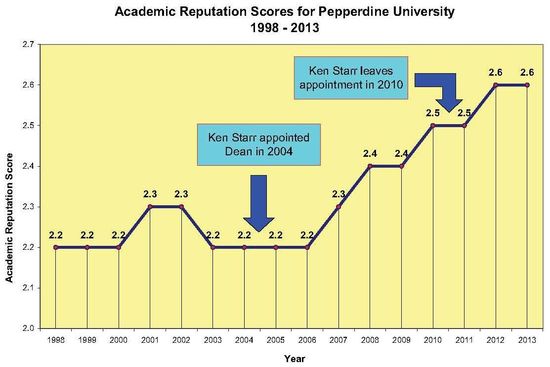 I identified three research-oriented law schools where, compared to the rest of the legal academy, conservatives have fared well during faculty hiring: George Mason, San Diego, and Pepperdine. Why these three? (If there are other law schools that have tried to build a strong conservative faculty brand, they have escaped my attention.)

But wait, fellow academics vote in the USN Academic Reputation survey, and supposedly we are an overwhelmingly liberal.  So why did these three conservative school fare so well?  This could be combination of three factors:

If moving on USN Academic Reputation is really important to a faculty, the lesson here is, "make a hard, high-profile right turn, and wait a decade."  That said, there are probably not enough spoils to go around for more than a handful of conservative law schools to use this strategy.

On Rick's last point, I think I wrote that the three faculties had strong conservative public law faculties, not that the schools "were" in some general sense conservative, although maybe at some point I did use the summary label. In my remarks at the Federalist Society conference I mentioned the possible "social justice" orientation of some Catholic institutions. (Also, it's not really a quibble to point out that Pepperdine isn't a Catholic institution!) I may be posting some additional thoughts on across-institution diversity over the next few days.

Listed below are links to weblogs that reference Tushnet: Reflections on the Federalist Society, Pepperdine, and 'Conservative' Law Schools:

The natural rejoinder is that it's less important to have within-institution ideological diversity than to have other types of diversity. The accuracy of that belief was part of what the conference was intended to address. So I do not think anything has gone off the rails.

I can't speak to Pepperdine or San Diego, but George Mason's USN faculty rep score significantly lags its US News rep. among lawyers and judges, and even more so objective measures of faculty quality, in particular the St. Thomas study. http://www.leiterrankings.com/new/2012_scholarlyimpact.shtml