Citizens for Tax Justice, Who Pays Taxes in America in 2013?:

It is sometimes claimed that many low- and middle-income Americans don’t pay taxes while the richest Americans pay a hugely disproportionate share of taxes, especially after enactment of the “fiscal cliff” deal that allowed some taxes to go up.

As the table ... illustrates, America’s tax system is just barely progressive even after the fiscal cliff deal’s effects. Claims that the rich pay a disproportionate share of taxes often focus only on the federal personal income tax and ignore the other taxes that people pay, like federal payroll taxes, federal excise taxes, and state and local taxes. Many of these other taxes are regres­sive, meaning they take a larger share of income from poor and middle-income families than they take from  the rich.

The table shows the share of total taxes (all federal, state and local taxes) that will be paid by Americans in different income. 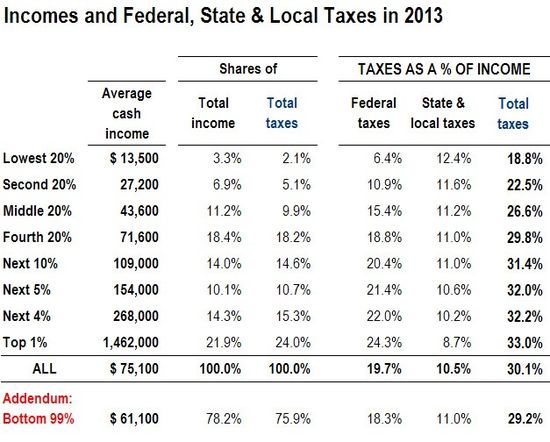 Listed below are links to weblogs that reference CTJ: Who Pays Taxes in America in 2013?:

My point is that I object to the claim that this is "all" taxes. It also doesn't seem to be including the excise taxes, who punish foreigners. Foreigners are bearing some of the cost of paying for our government.

I find it hard to believe that the lowest 20% pay any federal income taxes. In fact it would make more sense if their federal taxes as a % of their income was a negative number.

Maybe this chart is based on just those who do pay income taxes and the 40% or more who don't just aren't shown.

Keep in mind that everyone paying payroll and medicare will get all of that money back. It isn't a tax so much as it is a federal retirement plan. In fact, people get back about 3X what they pay into medicare.

A tax is something you pay that goes to the common good. Your retirement plan isn't my common good. A common good is a school for my neighbor. A bridge for my uncle. A military for all of us.

If you look at what the bottom 80% pay for the common good, it's almost non-existent. This is the big difference between the US and Europe. in Europe, the average Joe is paying a crapload towards the common good as well as his own retirement.

What a bizarre chart.