Following up on Friday's post, Offshore Cash Hoard Expands by $183 Billion at Companies: 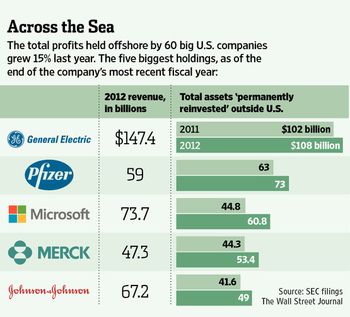 U.S. companies are making record profits. And more of the money is staying offshore, and lightly taxed.

A Wall Street Journal analysis of 60 big U.S. companies found that, together, they parked a total of $166 billion offshore last year. That shielded more than 40% of their annual profits from U.S. taxes, though it left the money off-limits for paying dividends, buying back shares or making investments in the U.S. The 60 companies were chosen for the analysis because each of them had held at least $5 billion offshore in 2011.

The practice is a result of U.S. tax rules that create incentives for companies to maximize the earnings, and holdings, of foreign subsidiaries. The law generally allows companies to not record or pay taxes on profits earned by overseas subsidiaries if the money isn't brought back to the U.S.

The Joint Committee on Taxation estimates that changing the law to fully tax overseas earnings would generate an additional $42 billion for the Treasury this year alone. Congress enacted a temporary tax holiday in 2004, prompting companies to repatriate $312 billion in foreign earnings. The law was intended to stimulate the U.S. economy, but studies found that few jobs were created and most of the money was used to repurchase shares and pay dividends. Another such holiday is considered unlikely in the next few years.

The Journal's survey of new regulatory filings found that the total earnings held by the 60 companies' foreign subsidiaries rose 15%, to $1.3 trillion, from $1.13 trillion a year earlier.

While the practice of shifting assets and profits overseas is legal, that could change. As the trend continues to grow in an era when the government is desperate to raise revenue, the strategy has drawn the ire of legislators eager to shut it down. ...

The federal corporate income tax in the U.S. is 35%. Last year, the six biggest drugmakers cut their effective rate by more than half, a record for the decade, according to a review of 10 years of filings by Bloomberg News. The filings also show that tax avoidance strategies make up a significant portion of the profits that investors use to assess drugmakers’ profitability. Spokespeople for the six drugmakers declined to comment or make any of their tax staff available for an interview. ...

Companies shift high-value assets to overseas subsidiaries in low-tax countries where the profits are booked using a process known as “transfer pricing.” While drugmakers aren’t alone in their use of the provision, “they are the poster children for aggressive transfer pricing,” said Martin Sullivan, a former Treasury Department economist and a contributing editor at Tax Analysts.

The median tax benefit of all six companies from locating profits overseas in 2012 was $1.12 billion. After Merck, the biggest benefits went to J&J, at $1.89 billion, and Abbott, at $1.56 billion. Pfizer, the world’s biggest drugmaker, recorded $16.8 billion in pretax foreign profits and a $4.73 billion pretax U.S. loss, and a tax savings of $362 million, the smallest for the six companies.

The company with the most profits parked overseas is General Electric, according to a new Bloomberg analysis of 83 corporations. GE said in a Feb. 26 regulatory filing that it was holding $108 billion in profits overseas as of the end of last year. That is up from $102 billion a year before. GE said in the filing that it reinvested most of these profits in foreign business operations and does not intend to bring those profits back to the U.S.

Listed below are links to weblogs that reference Corporate Profits and Offshore Cash Hoards Surge as Taxes Shrink: