In the South and West, a Tax on Being Poor 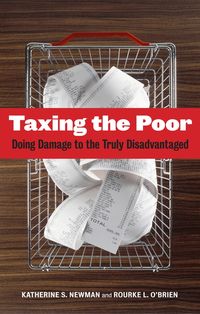 This book looks at the way we tax the poor in the United States, particularly in the American South, where poor families are often subject to income taxes, and where regressive sales taxes apply even to food for home consumption. Katherine S. Newman and Rourke L. O’Brien argue that these policies contribute in unrecognized ways to poverty-related problems like obesity, early mortality, the high school dropout rates, teen pregnancy, and crime. They show how, decades before California’s passage of Proposition 13, many southern states implemented legislation that makes it almost impossible to raise property or corporate taxes, a pattern now growing in the western states. Taxing the Poor demonstrates how sales taxes intended to replace the missing revenue—taxes that at first glance appear fair—actually punish the poor and exacerbate the very conditions that drove them into poverty in the first place.

New York Times: In the South and West, a Tax on Being Poor, by Katherine S. Newman (Dean, School of Arts & Sciences, Johns Hopkins University):

While the federal government has largely stuck by the principle of progressive taxation, the states have gone their own ways: tax policy is particularly regressive in the South and West, and more progressive in the Northeast and Midwest. When it comes to state and local taxation, we are not one nation under God. In 2008, the difference between a working mother in Mississippi and one in Vermont — each with two dependent children, poverty-level wages and identical spending patterns — was $2,300.

These regional disparities go back to Reconstruction, when Southern Republicans increased property taxes on defeated white landowners and former slaveholders to pay for the first public services — education, hospitals, roads — ever provided to black citizens. After Reconstruction ended in 1877, conservative Democrats — popularly labeled “the Redeemers” — rolled taxes back to their prewar levels and inserted supermajority clauses into state constitutions to ensure it could never happen again. Property taxes were frozen; income taxes were held down; corporate taxes were almost nonexistent.

Practically the only tax that could rise was the one that hurt the poor the most: the sales tax. And rise it did, throughout the Deep South in the late 19th century, then spreading into the Carolinas, Georgia, Florida and the rest of the region in the 1960s and 1970s. Even liberal politicians weren’t able to buck the tide — just ask Bill Clinton, who as governor of Arkansas urgently sought new revenue to improve his state’s ailing schools and found the sales tax was the only politically viable option.

Listed below are links to weblogs that reference In the South and West, a Tax on Being Poor:

In much of Canada residents are paying significantly higher rates of consumption tax on much broader bases the anywhere in the US through the GST/HST(VAT) system. Here are some headline rates: