Ed Koch: 'How'm I doing?' Lousy as an Estate Planner 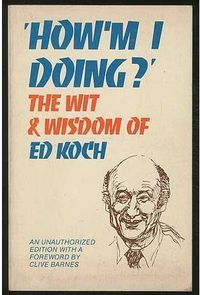 The world lost Ed Koch on February 1st, 2013; however, Mr. Koch who left only a 2007 will* to direct the distribution of his estate ... has left much of his estate’s worth to the government in estate taxes and probate fees.

Mr. Koch desired in his will to bequeath his estimated estate of $10 to $11 million to his sister, Pat Thaler, her three sons whom he “adored,” his faithful serving secretary of almost 40 years, Mary Garrigan, and some to the LaGuardia and Wagner Educational Fund with the remainder to other family members.

“He was such an accomplished, well rounded bachelor and a man of great Jewish faith. But I find it so surprising, himself being an attorney, that Mr. Koch did not manage his estate plan with the same veracity. I believe he could have done a much better job of avoiding the massive amount of taxes his estate will eventually have to pay,” laments Rocco Beatrice, Managing Director of Estate Street Partners, LLC.

Listed below are links to weblogs that reference Ed Koch: 'How'm I doing?' Lousy as an Estate Planner:

I guess now tax attorneys are not only zealously advocating clients' most selfish interpretations of their tax planning goals, but also supplying them.

The information in the article is not correct. It's not favorable for the profession when people comment on celebrities' taxes like that in order to criticize/mock the person who passed away.

I understand the larger goal that talking about estate planning helps motivate readers to set up their own plans, but wild conjectures can look tacky, especially when there are plenty of other sources that reflect charitable giving done during life.

Lack of veracity or tenacity?

Maybe in not minimizing taxes Mr. Koch was listening to a different drummer. There is precedent: "Oliver Wendell Holmes left the residue of his estate to the federal government." http://www.ssa.gov/history/hueychapt4.html. The word patriotic comes to mind.

Are former public servants supposed to try to avoid taxes?