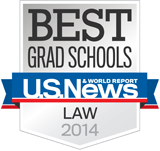 Continuing a TaxProf Blog tradition (see links below for 2009-2013), here is the full list of the 194 law schools ranked by academic peer reputation, as well as their overall rank, in the new 2014 U.S. News Law School Rankings (methodology here):

Law schools ranked by US News & World Report magazine in the 50 to 150 range were the ones most affected by the availability this year, for the first time, of more detailed graduate employment data from the ABA, according to US News rankings czar Bob Morse.

The new data "unmasked" that some of those schools had a relatively small number of their students taking full-time long-term jobs that require a JD, Morse tells Bloomberg Law's Lee Pacchia.

Many schools on the east and west coasts also saw drops in their rankings as a result of the new data, Morse said. University of San Francisco School of Law had this year's biggest drop, declining 38 places on the rankings, coming in dead last at 144 on the list.

At the top of the list, Yale continued to claim the #1 spot, with Harvard inching up one slot to tie with Stanford at #2.

Turning to last month's controversial National Jurist magazine ranking of schools, which was meant to provide an alternative to US News' list, Morse says "welcome to the world of law school rankings, and the world of being criticized for your methodology."

As for the power of US News' rankings, which some deans blame for legal education's woes, Morse says, "US News isn't the ABA . . . We're not responsible for the cost law school, the state of legal employment, the impact that the recession has had on hiring, or the fact that there are 10 or 20 new law schools that have opened over the past couple of decades. And we're not responsible for the imbalance of jobs to graduates."

I would love to see a law school ranking by profitability.