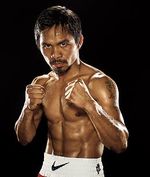 Manny Pacquiao's chief adviser insisted Monday that the Filipino superstar's preference is for his next bout – a fifth fight against Juan Manuel Marquez – to take place away from Las Vegas, with the off-shore Chinese gambling resort of Macau emerging as the "favorite."

Michael Koncz told Yahoo! Sports that the 39.6 percent tax rate Pacquiao would face if he were to fight again in the U.S. makes a fall bout in Las Vegas "a no go."

Promoter Bob Arum is hopeful of arranging a fifth match between Pacquiao and Marquez in the fall, potentially on Sept. 14. Arum's preference is for the fight to be at the MGM Grand in Las Vegas, which is his company's home base.

But Arum and Koncz say Pacquiao is balking at the additional money he'd lose to the government if the fight were held in Las Vegas. Arum said Pacquiao would not have to pay taxes if the fight takes place in casinos in either Singapore or Macau.

"Manny can go back to Las Vegas and make $25 million, but how much of it will he end up with – $15 million?" Arum said. "If he goes to Macau, perhaps his purse will only be $20 million, but he will get to keep it all, so he will be better off."

Insurance chain State Farm is reportedly buying up substantial workspace in Texas, which may signal a coming exodus from the company's home state of Illinois. ...

At the end of 2010, in a special session, the Illinois Legislature passed a 67% hike in its corporate and personal income tax. The state is struggling with a structural deficit and its credit rating was recently lowered. The state now has the worst credit rating in the country. A number of businesses have floated the idea of leaving the state. A move by State Farm, however, would devastate the downstate economy.

Listed below are links to weblogs that reference Manny Pacquiao KO'd by 39.6% Tax Rate, Refuses to Fight in U.S.:

Pacquiao needs to be told that Hairy Reed voted for that tax rate.

Thank you, Eli, for that information. I suspect that right-wing media are not letting the facts get in the way of a good anti-tax story.

I have been assured by numerous leftists that higher taxes have only good consequences.

I would be astonished if State Farm moved it's headquarters down to Texas. It is a huge sprawling campus in Bloomington-Normal. I worked there for a while.

Insurers owe income tax in addition to the premium tax. I believe this applies to mutuals too. In any case, State Farm has multiple entities (like State Farm Fire Insurance) that are not mutuals so the incentives to leave are mounting. Plus the increase in state personal income tax means that their employees are worse off than previously. At some level, that starts to require higher salaries to keep employees. So Texas becomes attractive.

Certainly all of the employees are taxed by the state, including the CEO and any other decision-makers.

To Hell with Manny Pacquiao.

This is a man who, as a Constitutional officer for the Government of the Philippines, came to the United States and actively campaigned for Harry Reid.

He should have been deported and declared persona non grata.

Last time I looked (I worked at a life company until 1995) it was a premium tax -- each state collected 2% or so on all premiums paid by their residents. Complicated set of rules deters states from charging higher tax on premiumns paid to 'foreign' companies (foreign means not-this-state, in insurance lingo) than domestics.

If you live in Arizona, Arizona gets the tax on your premiums, not Texas or wherever State Farm is domiciled (another insurance word).

Can anyone explain how mutual insurance companies are taxed at the state level?

I have a client who travels to Bloomington frequently, and tells stories of missed connections and weather delays. I can think of many reasons a company might want to move from small-town Midwest to big-city Sun Belt, but taxes are not at the top of the list.

More likely is that there are state laws that hinder or facilitate demutualization. It's inevitable, with State Farm. I have been sending my State Farm insurance payments from Arizona to their regional office in Dallas, for many years. I would have shopped for a better company years ago, but I would then miss out on becoming a shareholder.