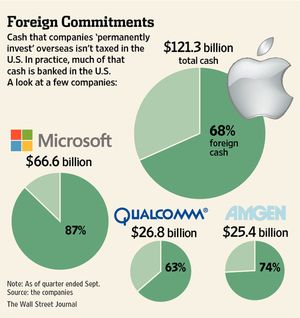 There's a funny thing about the estimated $1.7 trillion that American companies say they have indefinitely invested overseas: A lot of it is actually sitting right here at home.

Some companies, including Internet giant Google, software maker Microsoft and data-storage specialist EMC keep more than three-quarters of the cash owned by their foreign subsidiaries at U.S. banks, held in U.S. dollars or parked in U.S. government and corporate securities, according to people familiar with the companies' cash positions.

In the eyes of the law, the IRS and company executives, however, this money is overseas. As long as it doesn't flow back to the U.S. parent company, the U.S. doesn't tax it. And as long as it sits in U.S. bank accounts or in U.S. Treasurys, it is safer than if it were plowed into potentially risky foreign investments.

In accounting terms, the location of the funds may be just a technicality. But for people on both sides of the contentious debate over corporate-tax reform, the situation highlights what they see as the absurdity of rules that encourage companies to engage in semantic games, legal gymnastics and inefficient corporate-financing methods to shield profits from U.S. taxes. ...

The fact that much of the money already is in the U.S. also undermines a central argument made by companies seeking tax relief to bring home money they have earned abroad, tax experts and lawmakers say: That the cash is languishing overseas when it could be invested to the benefit of the U.S. economy.

Edward Kleinbard, a professor at the University of Southern California's Gould School of Law and a former chief of staff for Congress's Joint Committee on Taxation, said there is a misperception that companies' excess cash is inaccessible, "somehow held in gold coins and guarded by Rumpelstiltskin." "If it is a U.S.-dollar asset, that means ultimately it is in the U.S. economy in some fashion," he adds. "Where it is not is in the hands of the firm's shareholders."

Update:  The Tax Analysts Blog:  Missing Half the Cash, by David Cay Johnston

Listed below are links to weblogs that reference WSJ: American Companies Keep Stockpiles of 'Foreign' Cash in U.S.:

"The U.S. is the only major economy whose tax authorities claim a share of a domestic company's profits no matter where those profits are earned.". Australia taxes domestic companies on world wide earnings. I think the UK probably does as well. I find this statement confusing.

It would be great to see commentary on this topic that (a) recognized the distinction between the ancient GAAP rule on "permanently reinvested" foreign earnings, APB Opinion No. 23, and the ancient, loophole-ridden IRC provision, section 956; and (b) explored how US-based multinational corporations manipulate these rules to their advantage (at an intellectual level somewhere above screaming "abuse"). For starters, do away with the ancient GAAP rule. Make US-based multinationals accrue deferred tax liabilities for the undistributed earnings of their foreign subsidiaries. Then, with the GAAP-IRC arbitrage off the table, consider the effect on tax planning for reinvestment versus repatriation of foreign earnings.

Good God - what a mix of ignorant hogwash. If a foreign company owns a US T-bill, is that T-Bill taxable in the US. If the foreign company keeps cash in a US bank (US location or foreign branch), that money is specifically not taxed. Does it matter that the foreign company is US owned or foreign owned??
Kleinbard’s straw man – NO ONE EVER ARGUED THE FUNDS HAD TO BE INACCESSABLE.
Guess what – all of the tax law is a “technicality.” For better or worse, the tax law is made up of rules. The rules can be changed by act of Congress. Until then, I get up every day and strive to avoid giving an unnecessary dollar to the US (or any other) fisc. You see I do not have the credentials (whatever they are) to be an expert in tax policy.
The US rate of 40% (why leave out the state average net of federal deduction) is far higher than the 15-27% rate OECD average. Who are the morons who act surprised that US companies try to reduce their tax rate to that paid by foreign competitors? Lowering tax rates kills my business. Business people would also like to avoid the technical tax deals.