NLJ: Applicants Are Avoiding Law School in Droves (Especially Those With 170+ LSATs)

National Law Journal:  Avoiding Law School in Droves: The Numbers of Applicants May Slump by 20 Percent:

Nearly everyone in legal education expected the number of law school applicants to fall off this academic year. But they weren't prepared for this.

As of mid-January, 27,891 people had applied for seats in American Bar Association-accredited law schools. That represented a 20 percent decline since last year (and 2012 was hardly a banner year itself, as the number of applicants fell by nearly 14 percent.) If the trend holds through the final months of the admission cycle, law schools would see a 38 percent crash since their peak in 2010. ... At the present rate, between 53,000 and 54,000 applicants will vie for places in ABA-accredited schools this year, down from 68,000 in 2012. ... 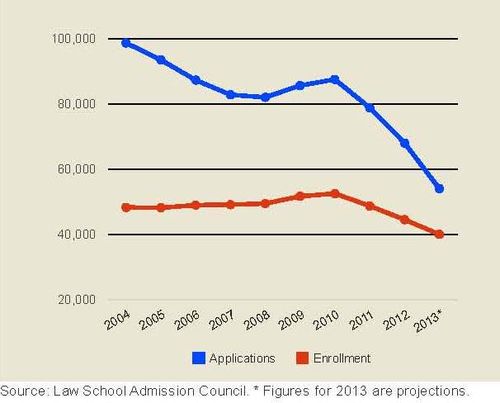 Law schools basically have two options at this point. ... They can reach deeper into their applicant pools and take students with lower academic credentials, risking their U.S. News and World Report ranking; or accept smaller classes by continuing to insist on higher LSAT scores and undergraduate grade-point averages — both of which are weighted heavily in the magazine's law school rankings. Most schools will probably decide upon a combination of approaches, according to a survey of incoming class sizes and the academic credentials of this year's crop of students at U.S. News' top 100 schools, as reported on their websites.

Listed below are links to weblogs that reference NLJ: Applicants Are Avoiding Law School in Droves (Especially Those With 170+ LSATs):

"Law schools basically have two options at this point"

Umm, not really. The author severly underestimates schools' propensity to generate revenue from other sources, particularly in times of desparation. Look out for these schemes, which we're already seeing deployed in full force to pad the coffers:

It'll be a race to the bottom. Law schools will not go easily.

The peak of the 1990 "baby boomlet" should have finished undergrad last year, so much of this year's decline may be demographics.

See, they really are smarter.

This has its limits, as not every country uses English Common Law as its base; many use the Napoleonic Code.

For a school like Tulane, this has always been a source of students, because of the influence of the Napoleonic Code on Louisiana law as well as Tulane's Admiralty Law program; I'm not sure how well it will work for others.

1) Why do Law schools only use undergraduate GPAs which may be decades old or grade inflated/deflated (from tech schools)? Why not consider any graduate GPAs instead?
2) Why don't law schools offer Law baccalaureate degrees?
3) Law schools could also allow graduate level students to audit law classes boasting their incomes while allowing non-traditional students who do not want to pursue the full, multi-year program a chance to take courses of interest.

Because most states no longer accept them for bar admission. And, because it takes 7 years for the universities to finish skinning them.

"The peak of the 1990 "baby boomlet" should have finished undergrad last year, so much of this year's decline may be demographics."

If this were solely a demographic issue, we should be seeing a similar drop-off in applications across the board at all graduate and professional schools. But we don't.

We have too many lawyers! We don't need a single new lawyer for 10-20 years. Don't waste your time, don't waste your life. Do something productive. You have been warned

Really, was anything worth the cost beyond the first year. I say 2-3 semesters and then internships that are practical.

Does my heart good to see this. My son was one of those who opted not to enroll this last fall. Now he's working at a real job and understands that he dodged a large caliber bullet. Can't wait to see what 'higher education' looks like in 10-15 years. Hopefully, there will be LOTS of unemployed university administrators and professors. Let's see how their far leftwing ideology serves them in the real world where results matter.

PD Quig: thanks for expressing what most often the scam-ists refuse to say: they just want people ot lose their jobs. WHy? Well.....just because. Nice to know you think so highly of your fellow man/woman.

Sorry, Anon, but this isn't just about right-wingers that have it in for the ivory tower types. Real people are being absolutely destroyed financially, all because they did what seemed like the right thing -- getting a law degree.

These people, with their six-digit debt and poor job prospects, are also your fellow man/woman. Try thinking a little more about them.

john: good point. That must be why PD Quig qualified his statements to ensure that only those professors and administrators that are evil (and do not spend enough time thinking about the plight of their graduates) get fired.