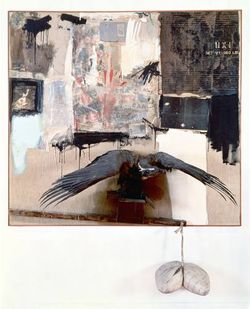 When Glenn D. Lowry arrived 17 years ago as director of the Museum of Modern Art, he and the curator Kirk Varnedoe sat down and wrote out a list of the 10 works they most wanted. Canyon, a landmark of 20th-century art by Robert Rauschenberg, was at the top, Mr. Lowry recalled.

Now that wish has come true. Canyon is to go on display on Wednesday at the Modern after being captured in a contest with its uptown sister, the Metropolitan Museum of Art, where it had resided on and off since 2005. Its owners agreed to donate the work as part of a $41 million settlement with the IRS.

That stuffed bird is ultimately the reason Canyon is being donated at all. The presence of a bald eagle — a bird protected by federal laws — means that the work cannot be legally sold or traded. So when the Sonnabend children, Nina Sundell and Antonio Homem, inherited Canyon, five years ago, their appraisers valued it at zero. The IRS, however, insisted this masterwork was worth $65 million. It demanded they pay estate taxes of $29.2 million plus another $11.7 million in penalties. As part of the settlement, the IRS dropped the tax assessment; in exchange, the family was required to donate Canyon to a museum where it would be publicly exhibited and claim no tax deduction, Mr. Lerner said.

Only in the fantasy bazaar of the U.S. government's imagination can an item that is worthless carry a multimillion-dollar price tag. ...

There is a sense in which Ilena Sonnabend's heirs never really owned Canyon. It ceased to be their property from the moment they inherited it. First it was, as they say in the auction business, "burned" by one federal agency, rendered as unsalable as if it were a fake. Then another forced them to choose between giving it away at no benefit or holding on to it for a hefty fee. What the government takes away with one hand, it takes again with the other.

Listed below are links to weblogs that reference Estate Planning for Illegal Assets: The Final Chapter:

They should have simply destroyed it. It was stolen from them, pure and simple. Then calim it as a casualty loss. Hilarity ensues as the government claims it was worth $65 million and $0 at the same time. Heisenberg would be proud.

For what amount did the Museum insure the work?

The heirs should have donated the painting to the museum and flipped the bird to the IRS.