Among the Fortune 500 corporations, 290 have revealed that they, collectively, held nearly $1.6 trillion in profits outside the United States at the end of 2011. This is one indication of how much they might benefit from a so-called “territorial” tax system, which would permanently exempt these offshore profits from U.S. taxes.

Just 20 of the corporations — including household names like GE, Microsoft, Apple, IBM, Coca-Cola and Goldman Sachs — held $794 billion offshore, half of the total. The data are compiled from figures buried deep in the footnotes of the “10-K” financial reports filed by the companies annually with the Securities and Exchange Commission. 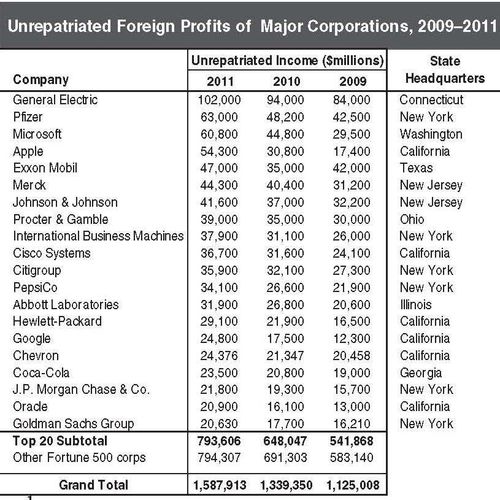 Listed below are links to weblogs that reference CTJ: Fortune 500 Are Holding $1.6 Trillion of Profits Off-Shore:

HP loans itself its foreign sub assets in specially structured alternating loans. So that money is effectively but is owed back every ninety says or less. Senator Levin wants to stop the loan because it flaunts Subpart F while remaining technically compliant.