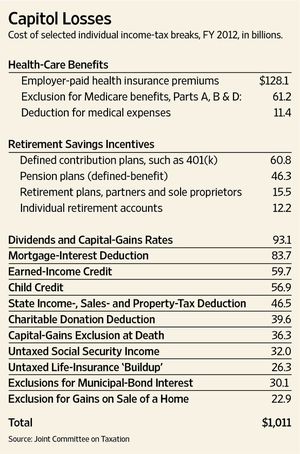 Election Day is almost here and the tax code is in flux, with the presidential candidates presenting starkly different plans for income-tax rates, capital-gains taxes, estate taxes and other key provisions for 2013 and beyond.

But one idea is gaining support from both political parties: cutting individual income-tax breaks. Republican presidential candidate Mitt Romney has advocated putting an overall limit on deductions such as the ones for home-mortgage interest and state and local taxes, while President Barack Obama wants to cut the value of those and others, but only for top-bracket taxpayers. It is too soon to predict exactly what will happen to which benefits, or when. ...

Overhauling the tax code could produce a simpler and more efficient system, say economists in both political parties. The individual income tax brings in more revenue than any other federal levy—about 47% of the total—yet it forgoes almost as much to scores of exceptions for mortgage interest, employee health insurance, capital gains, charitable donations and many more. (Please see the table [right].)

In fiscal 2011, for example, the individual income tax raised $1.1 trillion, but "lost" $953 billion to such breaks, according to estimates by Congress's Joint Committee on Taxation. The Simpson-Bowles deficit-cutting commission and Mr. Romney both have suggested cutting tax rates even as deductions are pared back. Recently 80 CEOs of major companies joined them, calling on Congress to enact "comprehensive and pro-growth tax reform, which [cuts tax breaks], lowers rates, raises revenues and reduces the deficit."

Such an overhaul could make any remaining tax breaks less valuable. In the current system, a taxpayer in the 35% bracket saves 35 cents per dollar of deductions. "If rates are reduced, the value of deductions and exemptions will fall proportionately," says Roberton Williams, a tax expert at the Tax Policy Center in Washington.

In general, experts say, the biggest tax breaks are likely to be the ones that will attract the most scrutiny, so knowing what might be in play is the first step in changing your strategy. Here is a roundup of some of the most widely used tax benefits and who uses them, plus tips for maximizing them where possible.

Listed below are links to weblogs that reference WSJ: Tax Breaks Under Fire: